Visit msnbc.com for Breaking News, World News, and News about the Economy

There is a lot of talk these days about government run health care, government run banks, government run industries. But if you take even a simple cursory look at all of the evidence and our priorities – of who is being “helped” to succeed and who is being allowed to fail in our society – it is clear that the corporations run the government not the other way around. The banks are too big to fail and the rest of us are too small to succeed.

Our thirst for war, our lust for banking deregulation, and our pathological aversion to a public option all have a green paper trail leading from lobbyists to Washington. Were it just the Republicans taking the money, we could argue at least that there was some ideological nexus. But even key Democrats and pseudo liberals are on the payroll, as the New York Times reports here and the Washington Post reports here and here. According to the Post,

Nearly half the members of a powerful House subcommittee in control of Pentagon spending are under scrutiny by ethics investigators in Congress, who have trained their lens on the relationships between seven panel members and an influential lobbying firm founded by a former Capitol Hill aide.

In the above video (beginning at minute five), Glenn Greenwald describes the direct financial interests behind the positions that the liberals Joe Lieberman and Evan Byah hold on health care, regardless of the clear mandate of their respective electorates.

A few weeks ago in a debate on whether to increase troop levels in Afghanistan on This Week with George Stephanopoulos, three out of four guests, including influential war-loving Democrat Diane Feinstein, were all unquestionably and unapologetically pro-escalation. The only panellist against escalation, Rep Jim McGovern, was given considerably less time than the others. What kind of debate is that, Mr. Stephanopoulos? The highlight of the program was Feinstein, the Chair of the Senate Intelligence Committee, saying that all she knew about troop levels was what she read in the newspapers. In other words, we send troops to war based on what key members of congress read in the papers. It’s rare that we now need to look to George Will — a lone conservative who is in favor of pulling troops from both Afghanistan and Iraq – for a little ideological honesty.

Then we have the more likable, tempered and soft-spoken conservative David Brooks — who regardless of being wrong on every aspect of the build up to Iraq is still permitted to opine on Afghanistan – questioning President Obama’s resolve as a war president (as if the only option available to a “war president” is more guns), making the factually inaccurate, unsubstantiated and blatantly false claim that “like most people who have spent a lot of time in Afghanistan, believe this war is winnable.” Almost everything from the ground in Afghanistan points to the fact that we should get out ASAP (here, here, here, here, here, here, and here).

With a unanimous political and press corps in favor of the same corporate interests, it’s not too difficult to figure out who is receiving all of the entitlements and who is is running the show.

Here is the problem: conservatives want to blame the world’s problems on the tiny, irrelevant ACORN whose total government windfall is a mere drop in the bucket compared to the military contractors and war profiteers — such as Halliburton, Blackwater and the rest of the gang — who have all received and mysteriously made disappear billions of taxpayer dollars without any government scrutiny or oversight whatsoever. Congress could pass a law prohibiting companies convicted of fraud from participating in future government bids, but that would negatively affect the war profiteers, all of whom have previously been convicted of fraud and continue to be on the government payroll. All the conservatives really want to do is punish ACORN alone.

So now some ingenious Republicans have proposed legislation that would exclusively punish ACORN.  This of course would be a Bill of Attainder, and Bills of Attainder are both clearly and explicitly prohibited by the Constitution (Congress legislates, the Judiciary adjudicates). The above video is from a funny exchange between Rep. Alan Grayson and Rep. Broun where Grayson educates Broun on the law. It’s nice to see how uneducated our legislators are on legislating. Either that or how little could care about the Constitution. 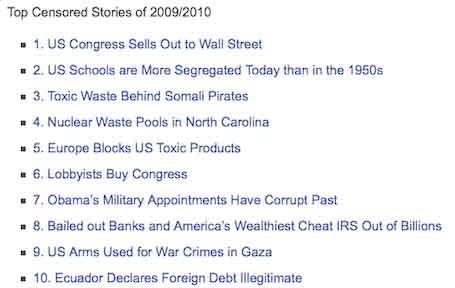 The Top Censored Stories for 2010 have just been (ironically) published.

It was very nice to open the Washington Post this morning and find my friend and former boss, Angel Cabrera, right there on the front page of the online version. Angel was writing about global leadership, though I would not necessarily agree with his listing of the present Goldman Sachs CEO as an exemplary top executive.

A simple cultural observation: in the U.S., you always say “Hello” when you casually pass an acquaintance on the street. In Spain, it is always “Adios”.

The Transfer of Wealth Myth 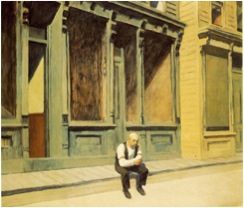 I recently received a chain email with one of those great American myths: that somehow the poor are the advantaged people in American society, feeding off of hard working Americans.

Our educators should make a lesson plan on these statements and instill these words in the minds of all students instead of doing the opposite.

This would be funny if it were not such an integral part of the naïve American psyche, if we didn’t think that somehow we were constantly being cheated by the poor — contrary to every possible fact, statistic, and evidence imaginable. Of course, I am not arguing that government intervention, welfare programs, and “socialism” are the answer. Nevertheless, the reality of American economic policy under both the Republicans and Democrats since the 1980s has proven to be nothing other than a massive transfer of wealth from the taxpayers to the rich, not the other way around. As Paul Krugman recently explained about the Republican revered Reaganism,

Let’s talk for a moment about why the age of Reagan should be over.

First of all, even before the current crisis Reaganomics had failed to deliver what it promised. Remember how lower taxes on high incomes and deregulation that unleashed the “magic of the marketplace” were supposed to lead to dramatically better outcomes for everyone? Well, it didn’t happen.

To be sure, the wealthy benefited enormously: the real incomes of the top .01 percent of Americans rose sevenfold between 1980 and 2007. But the real income of the median family rose only 22 percent, less than a third its growth over the previous 27 years.

Moreover, most of whatever gains ordinary Americans achieved came during the Clinton years. President George W. Bush, who had the distinction of being the first Reaganite president to also have a fully Republican Congress, also had the distinction of presiding over the first administration since Herbert Hoover in which the typical family failed to see any significant income gains.

The Republican “no government intervention” doctrine is little more than a sham whereby the government steps in time and again on behalf of the rich. Not that the Democrats aren’t part of the problem. The best example is how, first with Bush and then followed by Obama, the taxpayers just bailed out Wall Street, and now Wall Street is celebrating what JP Morgan recently called their “best year yet”; the taxpayers their worst.

Meanwhile, the American press with the indignation of the Republicans has decried the abuse of taxpayer money by the corrupt ACORN. How stupid do they think we are? ACORN is an irrelevant nothing. In thirty years, Acorn received in government funding roughly what Halliburton, Dick Cheney’s former company, received per day during the entire Iraq war. Furthermore, every single major military contractor still receiving taxpayer dollars has been convicted of fraud at least once in U.S. courts. But, we have ACORN hysteria.

The whole idea that the poor keep benefiting at the cost of the rest of Americans wouldn’t be such a laughable farce if it weren’t for the fact that people actually believe it. Since when have the poor gotten richer and the rich poorer in this country? And yet we continue to be a country that believes deeply that “we” are being played, victimized by the poor. Who would you rather be in the U.S.? A poor woman milking the welfare state or Liz Cheney, who — along with every other child of the rich and famous — has trouble landing a job she deserves based on merit alone?

In the U.S. we call it Columbus Day, and it commemorates the discovery of the Americas by Christopher Columbus and is generally celebrated by Italian Americans. In Spain, it is called the Día de la Hispanidad, Fiesta Nacional (National Holiday) and marks the spread of Spanish culture around the world. Ironically, though, this day is also el Pilar — the patron saint of the military — and Spain celebrates Hispanidad by military parade — probably not the friendliest gesture to a world once conquered by force, imperialism and ethnocentrism. This is particularly odd considering that Spaniards are almost always uniformly anti-war. I suppose it would be like the U.S. celebrating Thanksgiving, not with Turkey, but with a procession of tanks and soldiers down Constitution Avenue.

Only in New York

My friend, Christophe, sent me this, allegedly from Craigslist. Albeit pre-crisis, the fact that is in New York almost makes it believable: