Today I had intended on writing something about Ferguson and how and why the Revolution would begin. I was going to explain how the system is supposed to work: prosecutors belong to the executive branch with the communities they serve as their constituents. When there is a murder or an alleged crime and the community wants a trial, the prosecutor practically has a political duty to try the case. And in a case like the Brown one where the facts are very much open to interpretation, the only way for a satisfactory resolution is for a trial where the community – in the form of the jury – can listen to the presentation of the facts and the witnesses and render a verdict based on the standards of that community. In what I thought was going to be a profound observation, I was going to note that this was clearly not the case in Ferguson, and has not been the case in almost any of the other countless instances where an unarmed black male lay dead at the hands of the police. And this, this ultimate failure – arguably deliberate – in the system was what would eventually lead to the Revolution. Heck, less than that led the Revolutionary War in 1776.

But then I read Ta-Nehisi Coates reflection on the matter. Absolutely no one writes better about race in America today than Coates. Just a few highlights:

What clearly cannot be said is that violence and nonviolence are tools, and that violence—like nonviolence—sometimes works. “Property damage and looting impede social progress,” Jonathan Chait wrote Tuesday. He delivered this sentence with unearned authority. Taken together, property damage and looting have been the most effective tools of social progress for white people in America. They describe everything from enslavement to Jim Crow laws to lynching to red-lining.

“Property damage and looting”—perhaps more than nonviolence—has also been a significant tool in black “social progress.” In 1851, when Shadrach Minkins was snatched off the streets of Boston under the authority of the Fugitive Slave Law, abolitionists “stormed the courtroom” and “overpowered the federal guards” to set Minkins free. That same year, when slaveholders came to Christiana, Pennsylvania, to reclaim their property under the same law, they were not greeted with prayer and hymnals but with gunfire.

“Property damage and looting” is a fairly accurate description of the emancipation of black people in 1865, who only five years earlier constituted some $4 billion in property. The Civil Rights Bill of 1964 is inseparable from the threat of riots. The housing bill of 1968—the most proactive civil-rights legislation on the books—is a direct response to the riots that swept American cities after King was killed. Violence, lingering on the outside, often backed nonviolence during the civil-rights movement. “We could go into meetings and say, ‘Well, either deal with us or you will have Malcolm X coming into here,'” said SNCC organizer Gloria Richardson. “They would get just hysterical. The police chief would say, ‘Oh no!'”

The fact is that when the president came to the podium on Monday night there actually was very little he could say. His mildest admonitions of racism had only earned him trouble. If the American public cannot stomach the idea that arresting a Harvard professor for breaking into his own home is “stupid,” then there is virtually nothing worthwhile that Barack Obama can say about Michael Brown.

And that is because the death of all of our Michael Browns at the hands of people who are supposed to protect them originates in a force more powerful than any president: American society itself. This is the world our collective American ancestors wanted. This is the world our collective grandparents made. And this is the country that we, the people, now preserve in our fantastic dream. What can never be said is that the Fergusons of America can be changed—but, right now, we lack the will to do it.

Filed under Obama 44, We The People

Give Me One More Thanksgiving Holiday

Every year since I started this blog, at this time of year I always eagerly write about how excited I am with the coming Christmas season. And today being Black Friday, I can now officially start playing my Christmas favorites and decorating the house.

And as much as I love Christmas, I think that if I had one wish. If I could ask for anything in the world. There is nothing that I would want more than to take my wife and son along with, say 30 years back, to spend just one Thanksgiving holiday with my grandparents just like I did as a child. 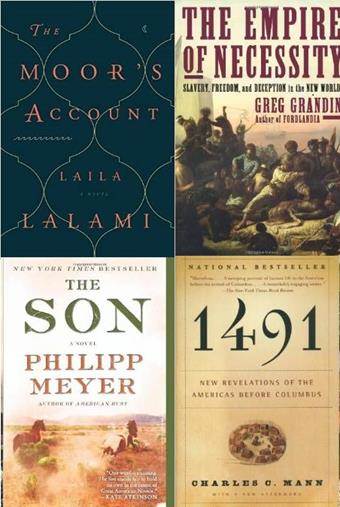 A few weeks ago I finished Laila Lalami’s new novel A Moor’s Account, a fictionalized account of the 1527 Narvaez expedition in Floria as told through the eyes of Estevanico, a slave of Moroccan descent.

I was interested in Lalami’s book for a few reasons: she is from the same city in Morocco as my wife, I had read and enjoyed Hope and Other Dangerous Pursuits, and I follow her very insightful articles and commentary on twitter. So, I was excited to read her new novel.

After having read it, I realized that it was based on the same story as Walk the World’s Rim, a novel I had absolutely fallen in love with at the age of 12.

In any event, A Moor’s Account has sparked my interest in learning much more about slavery under the Spanish in the Americas and Native American history, and the Columbian Exchange. In the past few weeks since finishing Lalami’s book, I have read The Empire of Necessity: Slavery, Freedom and Deception in the New World by Greg Grandin that uses a slave mutiny aboard a Spanish vessel off the coast of Chile in 1805 to discuss the slave trade in the Southern Cone during Spanish rule and its relationship with New England.

I have since moved on to the excellent The Son by Philipp Meyer, a family saga that traces the history of Texas, and Charles C. Mann’s 1491: New Revelations of the Americas before Columbus, soon to be followed by the sequel 1493: Uncovering the New World Columbus Created.

It is amazing how much the history of slavery and Native Americans differs from what I had learned as a boy growing up in Potomac, a town with an Indian name. For example, I had not known that in the early 19th Century close to a half of Argentina’s population was of Black African descent. Their absence today is more than conspicuous. And when I was a kid in school we were given the impression that Manifest Destiny was about the expression of freedom of religion where a vast open, mostly unpopulated terrain was there for the taking.  But we wouldn’t want to upset Republicans by trying to teach our most able kids otherwise? And someone should tell Newt Gingrich that maybe Texans aren’t a people either.

Filed under Literature, We The People

What is White Privilege?

In a very insightful interview in today’s New York Times about race in America, Naomi Zack explains that asking yourself what the Michael Brown case has to do with you, that is White Privilege:

Not fearing that the police will kill your child for no reason isn’t a privilege. It’s a right.  But I think that is what “white privilege” is meant to convey, that whites don’t have many of the worries nonwhites, especially blacks, do. I was talking to a white friend of mine earlier today. He has always lived in the New York City area. He couldn’t see how the Michael Brown case had anything to do with him. I guess that would be an example of white privilege.

Of course, I don’t live in the U.S. anymore, but if I did, I don’t think my fear would be the police shooting my son (but maybe the All American psycho), and that is White Privilege.

Filed under Parenthood, We The People