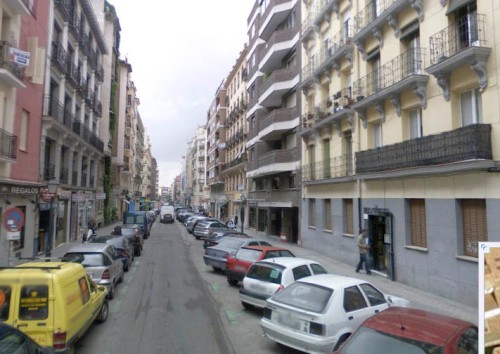 Back in late spring 2008 just as I was reaching my apartment in the Madrid neighborhood of Chamberí, I noticed a strange looking vehicle driving down my street. As it got closer I saw that it was the Google Maps car. I stopped and stared it down, hoping to be immortalized on Google Maps street view. And sure enough, a few months later, there I was. At least until very recently. Google has recently refreshed its Madrid street view and I am no longer standing at the door.

Coincidentally, just as my virtual tenure on Google Maps has come to an end, so have my 12 years in Chamberí. Tomorrow we move to a new address.

It all started back in June 2000. I had been working in Washington, DC at a small boutique law firm specializing in environmental law. I enjoyed the work and city, but quite out of the blue – and against my will – I was becoming one of the few experts on the regulation of nutrient pollution in man-made water bodies (for those who care, Section 303(d) of the Clean Water Act). However that may sound – exciting or excruciating – I was in my late 20s and didn’t want to be typecast so early in my career. In other words, the time was ripe to make a change. I chose to move to Madrid where I had close friends and a plan: do an MBA at Instituto de Empresa right when European business schools were taking a giant leap in competitiveness vis-à-vis their American counterparts.

So, in the Spring of 2000, I co-published an article entitled “Politics, Pollution and TMDLs: New Directions in Point and Nonpoint Source Liability for Watershed Restoration” in a now long-defunct trade magazine that no one ever read, and by summer I had quit my job , moved to Spain and the rest was history.

While looking for an apartment in Madrid, I moved in with an old friend and his then girlfriend in Chamberí. It took me two months – during which his girlfriend didn’t know which one of us to strangle – until I finally found a nice apartment in the very pijo Salamanca neighborhood.

But after one year in Salamanca and just as my MBA was coming to its end, my landlord – taking advantage of the end of Peseta – was in a rush to sell off the apartment, and I was left homeless. I had no idea whether I was going to stay in Madrid or move back to DC, but I needed some time. My friend who I had stayed with in Chamberí had just broken up with his girlfriend and – against what you would imagine – encouraged me to move in with her and help out with the rent until I could figure my next move. To make a long story short, she ended up taking a job in Barcelona, and I took over the management of the MBA program I had just graduated from along with her apartment.

In the meantime, I became a fixture in my neighborhood. I have my vegetable market, butcher, cheese guy and fish monger. I do the vast majority of my shopping locally. And when I walk down the street, everyone says hello and knows my name. It helps that my son was born at the hospital down the street, and all of the old ladies want to play with my curly-haired little boy.

While living in this house, I married, changed jobs three or four times. I have gotten good news and I have gotten bad news, and as mentioned, our son was born. I have watched as the local kids were born and grew up, and I have seen my neighbors grow old and pass away. I once even saw a neighbor begging for money in the metro.

And isn’t that what is so special about living in a city? In the U.S., we don’t really have cities. By cities I mean a place where people of all ages and classes live in the same buildings, walk the same streets and buy their groceries in the same stores. In Chamberí, I have had all of these: the old ladies, babies, teenagers, immigrants in the cheaper interior apartments and the bourgeoisie with their balconies. And of course, outside you see beggars and drunks. You are exposed to all faces of humanity.

But now after 12 years, it’s time to move on. We’re moving within walking distance to where my son will start school in September. And we are very excited to move to a bigger, more comfortable space. Nonetheless, while it is technically still within the city (and definitely a far cry from the American suburban life), we will lose my querida Chamberí barrio lifestyle.

Twelve years. That may be the longest time I have ever lived at one address. Almost as long as the house where I grew up. I don’t feel anything close the attachment I feel for my childhood home, but I will definitely cherish its place in my life.

Goodbye to 12 years in Chamberí.