I just finished reading Philip Roth’s The Human Stain — kind of an American version of Milan Kundera’s The Joke. The story takes place during the summer of 1998 in the middle of the Bill Clinton – Monica Lewinsky scandal.

After reading the first page, I was transported back to my own summer of 1998. Most of my memories of that time are blurry , for it was spent seven day a week, fourteen hours a day, for all of June and July preparing for and then taking the New York Bar Examination. August I spent in recovery with withdrawal pains. Yes, withdrawal pains. END_OF_DOCUMENT_TOKEN_TO_BE_REPLACED

Facebook is a great way to keep in touch with friends — old ones, distant ones, and new ones. I get to follow my friends’ big trips and their little adventures. But what I am increasingly finding annoying about Facebook is that my friend Christiana — who moved back to her native Greece from Washington, DC about 10 years ago — shuttles herself to a different beautiful and mystical Greek island almost every weekend. If going to Mykonos again wasn’t good enough, this weekend she had to go to Corfu. And from Corfu, to Paxi and Antipaxi.

After reading another irrelevant article about Obama and McCain, I just opened Facebook to find her amazing photos from the weekend.

The Geriatrics of War-Mongering

While Barack Obama hit his first three point attempt with all net in Kuwait, smiled with world leaders who smiled back, and made America look like a nice place after all, McCain stepped off a golf cart to pose for a photo opp at a geriatrics country club for the ultimate elite in Snobville, Maine with Bush 41. McCain then proceeded to complain that it was “No Country for Old Men”. But come one! Who wants to follow a wheelchair race?

This weekend in the New York Times, Frank Rich poked fun at John McCain’s complaints about an unfavorable press. Hasn’t McCain bee getting a free pass from the press?

It was laughable to watch journalists stamp their feet last week to try to push Mr. Obama into saying he was “wrong” about the surge. More than five years and 4,100 American fatalities later, they’re still not demanding that Mr. McCain admit he was wrong when he assured us that our adventure in Iraq would be fast, produce little American “bloodletting” and “be paid for by the Iraqis.”

Come to mention it, have we seen the press playing and replaying McCain’s determined and convinced congressional platitudes about the imminent dangers of Sadam Hussein and the cake walk that would be the invasion? END_OF_DOCUMENT_TOKEN_TO_BE_REPLACED

I am exploring with Jazz as a therapeutic treatment against writing political posts, and the song “Nuttin’ Out Jones” definitely takes my mind off politics and most other subjects. END_OF_DOCUMENT_TOKEN_TO_BE_REPLACED

What is McCain Talking About? 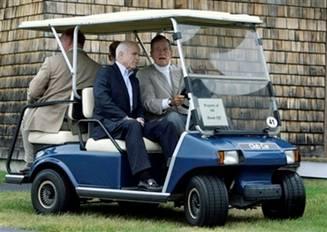 I am doing my best to steer this blog away from constantly focusing on the elections, but sometimes I can’t help it. And this is one of those days. The press is thoroughly enjoying itself following Obama around the Middle East in his efforts to pose as a commander-in-chief.

In response, McCain has met with Bush 41 and has reiterated his beliefs that Obama is wrong on Iraq and that the U.S. must stay the course so that we can win the war. Win in Iraq? What is McCain talking about? END_OF_DOCUMENT_TOKEN_TO_BE_REPLACED

Two More for the Road

I had already made my book and music online purchases for my trip back home when I realized that there were two other books that I had forgotten. One minor setback — that actually helps with my personal finance — is that I always travel obsessive-compulsively light. I do not check in luggage, and I take only one reasonable carry-on and a computer case.

Between the incredibly efficient (yet probably not environmentally friendly) American washer/dryer technology and already having a stockpile of underwear and toiletries back home, I really don’t need to pack much anyways. Thus when on the trip to the States, I basically just fill my suitcase with clothes that I no longer wear (I essentially retire or relegate them to my U.S. closet) and a few small gifts (if any). While in the States, I permit myself to purchase only a quantity of goods whose to volume is equal to the size of my reasonable carry-on.

Not only does this safeguard me against spending an absurd amount of time running errands to make random purchases for friends and co-workers in Europe, it also allows me to stay within a budget. The items that can accumulate and become costly are iPods and CDs. CDs don’t take up any space at all. Once I buy them, I reduce them to electronic format anyways and store them inside my computer. Ipods — much cheaper in the U.S. because of the weak dollar — are inevitably what everyone asks me for and also do not take up much suitcase space. I can also get iPods for a bunch of different people in just one trip to the Mall — for some reason, everyone I know thinks that there is an Apple store on every American street corner, and sending me out on an iPod and/or MAC shopping spree is like walking to the end of my driveway to pick up the mail.

Why am I telling you this? END_OF_DOCUMENT_TOKEN_TO_BE_REPLACED

My very good friend and former co-worker, William, has recently left FON and migrated to Mozilla where he will serve as European community manager. As part of his new responsibilities, William has just started a Mozilla-centric blog. Two weeks ago in Paris, William and I brainstormed on what domain name to give this new William’s blog (his previous blog has long been abandoned). As we are both die-hard Jazz fans and after seeing that most of the cool Thelonious Monk related names were taken, we came up with http://somethin-else.org in honor of Cannonball Adderley’s historic recording of the same name.

If your interested in Open Source (or just curious) check out William’s blog. He promises to also occasionally talk about tropical fish and other minor digressions. 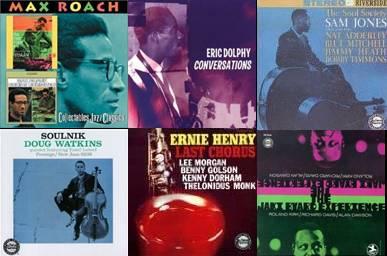 My modus operandi prior to traveling to the States for the summer and Christmas is to replenish my garrison with books and music that I cannot otherwise readily find in Europe. Thus, a week or so before leaving, I always go on Amazon or Ebay and make a large purchase (to be shipped State side). The supply — supplemented throughout the year with local purchases — generally lasts me until the subsequent trip. As a matter of fact, I have only two books left on deck that should last me from now until the time I travel. That’s some pretty good timing! In any event, here is what I have ordered.

When Not in Rome

When in Rome or when not in Rome, do as the Romans do, eat tomatoes! The other day I found some great tomatoes and basil at the fruit stand near my house in Madrid. I left them out for a few days to ripen, and today they were perfect. Then I went to a small Italian gourmet shop that I recently discovered in my neighborhood and got myself authentic mozzarella di bufala.

This evening I put them all together and prepared an insalata caprese, or tomato, basil, and mozzarella salad. I peeled and sliced the tomatoes and put them in the refrigerator for an hour to cool just below room temperature. They were sweet and just right — no need at all to even add salt. I barely even added any olive oil or pepper.

There is nothing like fresh, peeled, sweet tomatoes in the summer for dinner, especially when the sun goes down and it’s still 90ºF.

ReWrite has asked about my views on the New Yorker magazine’s recent controversial cover. Originally I doubted writing about it, mainly because a few friends of mine just told me that they much prefer my digressions to my political posts. I happen to agree. Furthermore, I really didn’t want to get involved in the press’ ongoing need to keep us interested via constant silliness.

Of course, I am also deeply concerned about America’s new socially accepted ethnic and religious hatred — all things Arab and Islamic. This is one of the main reasons that for me (like so many others) the New Yorker cover appeared to only reinforce the hatred and therefore simply wasn’t funny. Not only was it horribly not funny, but it also brought a lot of negative press to an otherwise stellar publication.

Yet before I passed judgment, I sent some feelers out. I listened to all of the podcasts on the matter and read all of the editorials and op-eds. In the end, I have pretty much sided with what Maureen Dowd and then Timothy Egan had to say (both in the New York Times). The New Yorker tried to show how silly the accusations against the Obamas have been (Fox’s fist bump/terrorist connection allegation being the most absurd), but it inevitably failed. It just wasn’t funny.

I think that Dowd is correct in stating that Obama and his supporters need to chill a bit and learn that it’s okay to be mocked. It’s even healthy, though I am not sure whether using religion and ethnicity are appropriate. I also think that Egan makes a good point in that we shouldn’t underestimate middle America’s intelligence and assume that it wouldn’t get the joke. There is something about being offended by this satire — whose intent was to criticize the hate mongers — that makes certain presuppositions of the average American’s ignorance just as offensive.

So basically, then, I am going to treat Obama’s criticism of the New Yorker cover and the cover itself, as I do when my team plays poorly, as a “bad game”. Everyone pretty much lost here: Obama, the New Yorker, the press, Fox, and American society overall for the fact that we even have to worry about these issues.