The Untold Vulgarity of Blood and Oil

In the second presidential debate after McCain told him that he “does not understand our national security challenges”, Obama responded,

I don’t understand how we ended up invading a country that had nothing to do with 9/11, while Osama Bin Laden and Al Qaeda are setting up base camps and safe havens to train terrorists to attack us.

That was Senator McCain’s judgment and it was the wrong judgment.

When Senator McCain was cheerleading the president to go into Iraq, he suggested it was going to be quick and easy, we’d be greeted as liberators.

That was the wrong judgment, and it’s been costly to us. So one of the difficulties with Iraq is that it has put an enormous strain, first of all, on our troops, obviously, and they have performed heroically and honorably and we owe them an extraordinary debt of gratitude.

But it’s also put an enormous strain on our budget. We’ve spent, so far, close to $700 billion and if we continue on the path that we’re on, as Senator McCain is suggesting, it’s going to go well over $1 trillion.

We’re spending $10 billion a month in Iraq at a time when the Iraqis have a $79 billion surplus, $79 billion.

And we need that $10 billion a month here in the United States to put people back to work, to do all these wonderful things that Senator McCain suggested we should be doing, but has not yet explained how he would pay for.

Now, Senator McCain and I do agree, this is the greatest nation on earth. We are a force of good in the world. But there has never been a nation in the history of the world that saw its economy decline and maintained its military superiority.

Nevertheless, Obama forgot to mention the most obvious reasons why Iraq was both strategically and morally wrong. For one, Exxon Mobil just announced, once again, record profits. How is it that since the war in Iraq our energy costs have gone through the roof, but Exxon Mobil is making a killing? We even want to further reward them by letting them “drill, baby, drill.” The war continues to benefit the oil companies and we pay the economic and human toll.

But worst of all, the press has all but ignored the grotesque civilian tragedy of the U.S. invasion of Iraq.  At the top of the list of “Top 25 Censored Stories for 2009” was the over one million Iraqi deaths caused by the U.S. occupation. END_OF_DOCUMENT_TOKEN_TO_BE_REPLACED

Which Country Do You Prefer? 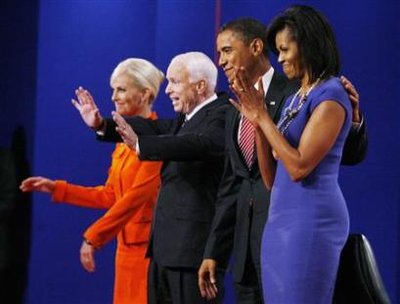 Following in the footsteps first of the Asbury Park Press and then the lesser known Washington Post and the New York Times, The Economist  — not celebrated for its socialism — has just endorsed Barack Obama.

In response to my recent post about Michelle Obama on Leno, a friend of mine recent wrote to me complaining — and the same argument could be made of Obama’s infomercial — that you cannot draw any conclusions about the Obamas based on interviews and speeches that are completely staged and scripted. I responded that, even if the interview were staged, Michelle and the Democratic ticket were trying to give a certain perception of how they wanted the U.S. to be. McCain Palin would give a very different “staged” performance — for they see America differently. As The Economist noted with respect to McCain’s selection of Sarah Palin, she was “chosen partly for her views on divisive social issues.”

So the question isn’t whether Obama is too staged, but rather which staged America do you prefer? One that seeks unity or one that sees America at war?

Here is Barack Obama’s TV special, his closing argument infomercial that aired last night on all of the major networks and cost a few million dollars. There are stories about “average working Americans” followed by Obama detailing his plans and then images of Obama being greeted or hugged by older white women. I suppose it is moving if you’re a Democrat and over-the-top if you’re Republican. And if you’re not American, then all you can say is “only in America.” Not once did he mention or criticize McCain or Palin.

Once again, Michelle is proving that she is an ideal American and the most normal, gracious and well-spoken of any of the candidates, running mates, or their families.

Get the latest news satire and funny videos at 236.com.

Thanks, William, for the heads-up.

How McCain Lost His Media Base

Recently I wrote about how the McCain campaign felt like it was being treated unfairly by the press. There I mentioned how prior to the GOP Convention, McCain was actually getting proportionally more positive coverage than Obama. Politico has written a story about how since the Convention, McCain has clearly “hosed in the press.”

The Project for Excellence in Journalism’s researchers found that John McCain, over the six weeks since the Republican convention, got four times as many negative stories as positive ones. The study found six out of 10 McCain stories were negative.

What’s more, Obama had more than twice as many positive stories (36 percent) as McCain — and just half the percentage of negative (29 percent).

So if the media was once McCain’s base, as he used to call them, what has changed since the GOP Convention to turn the press again McCain? END_OF_DOCUMENT_TOKEN_TO_BE_REPLACED

I hate to spread the hate, but I was just watching the latest Top Ten list from the Late Show with David Letterman, and it was pretty funny. Here it is:

In his monologue, Dave also had this good one-liner: “Sarah Palin doesn’t shop at low-end stores. As a matter of fact, she thinks Old Navy is John McCain’s nickname.” Jokes aside, I do think, as I have stated before, that the McCain campaign is to blame for the $150,000 shopping spree and not Sarah Palin.

Only one week to go. I can’t wait for change.

For the past few days, I have suffered from presidential election writer’s block. Actually, it’s not that I couldn’t think of anything to write, but there was nothing that interesting or novel to say that warranted a post. Nevertheless, today I finally decided to get my act together and write a few lines about some of the more interesting things we learned this week about the candidates and the election:

While I was preparing to elaborate on the above, I took a short break to watch McCain on Meet the Press. I was stunned. While I have criticized McCain for his overly military-centeric and extreme shift to the right (including his choice of Sarah Palin), I have consistently avoided disqualifying him due to age. But on Meet the Press, McCain looked exhausted. His voice was shaky, his hands trembled, his tone was offbeat, and at one point he seemed to lose his bearing — giving him that forgetful senior moment that everyone has been hoping would not happen. END_OF_DOCUMENT_TOKEN_TO_BE_REPLACED

After about a month and a half, I have only reached 1918 in Morocco Since 1830. That’s pretty slow, especially considering that I had been averaging about one book per week. So what’s going? The culprit is this darn election and me resorting to a combination of podcasts and other online sources of media. What is pretty amazing is that in both 2000 and 2004, I had trouble keeping abreast of the elections while living abroad, where now there is so much information (and disinformation) available online that is easy to stay tuned. That’s good news, except for the fact that I have a stockpile of interesting books waiting for me.

Luckily, the presidential race will come to its finish line by next week (in the absence of recounts, inshallah), and I can get back to reading. In the meantime, here is my podcast playlist: END_OF_DOCUMENT_TOKEN_TO_BE_REPLACED