The Healthiest President Ever!

I apologize for the revisionism, but these photos speak for themselves. 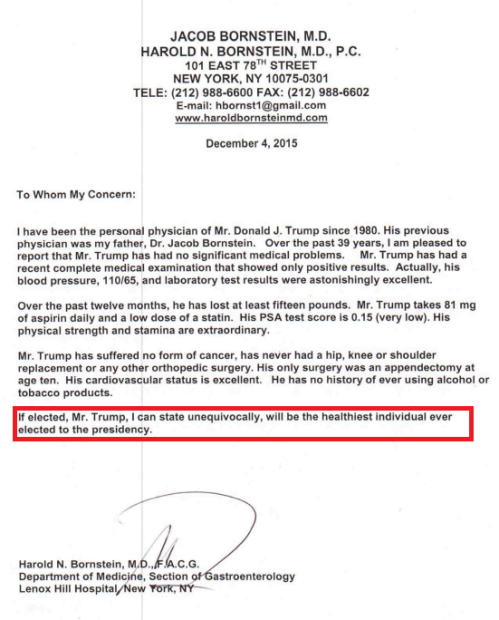 Blowin’ in the Wind .. the End of the Fiction

How many years can a mountain exist before it’s washed to the sea?

On the eve of this 2016 Presidential Election, it is looking like that story we’ve been telling ourselves for generations is fiction. Maybe we are not that great nation of ideas, that beacon on the hill, governed for and by the people after all, but a sectarian state where Republicans and Democrats are no different from the feuding Shiites and Shia of Iraq.

Think about how Republicans rationalize voting for Trump – perhaps the most disgusting and unqualified candidate of any major party in our nation’s history – by convincing themselves that Hillary Clinton is both evil incarnate and on a mission to purposefully destroy the country. The only honest assessment is that America the Beautiful has devolved into a tribal, sectarian state.

Let’s face the facts: Hillary Clinton is a crypto-Republican. During both her husband’s presidency and her time in government she has consistently promoted conservative causes and was certainly no radical. She has never taken a politically unpopular position and likely never will. She is best defined by her political expediency and certainly not ideology. In fact should she win on Tuesday, Hillary will become the most right of center Democrat to serve as President of the United States since the Great Depression.

On issue after issue, Hillary is undoubtedly a more suitable Republican candidate than Trump.  That of course assumes that we vote based on the issues, instead of tribal preferences. That the vast majority will vote in perfect alignment with their demographic, only confirms that tribalism is the most accurate determinant of voting behavior today in America.

In his recent history of humankind, Sapiens, Yuval Noah Harari writes about the cognitive revolution that took place in our species when we achieved the ability to create fictions, empowering us to “imagine things collectively.” In essence:

We believe in a particular order not because it is objectively true, but because believing in it enables us to cooperate effectively and forge a better society. Imagined order are not evil conspiracies or useless mirages. Rather, they are the only way large numbers of humans can cooperate effectively.

So what happens when the pillars upon which our fictions rest begin to crumble? END_OF_DOCUMENT_TOKEN_TO_BE_REPLACED

Back in 1936 after having honored the United States with four gold medals in front of Nazi Germany, when asked about Hitler, Jesse Owen reminded his interviewer that the U.S. president would not receive him either at the White House because he was black.

Shortly thereafter, World War II broke out in Europe causing one of history’s greatest human tragedies. America sent hundreds of thousands of its young men, black and white, to the front to help change the course of the war and reshape contemporary history. At the end of the war, the young American men returned and benefited from the greatest socioeconomic engineering campaign in American history, called the G.I. Bill. This program almost singlehandedly created the American middle class which has fueled the economy ever since. Excluded from these benefits were African Americans, with effects that are felt very much to this day, as described in Ta-Nahisi Coates’ The Case for Reparations.

Fast forward to 2016 and the White House looks like a very different place than it would have to Jesse Owens had he been treated any better by Roosevelt than he had been by Hitler.

So I don’t know what Mr. Trump is talking about. If we are going to make America better again, in which point of American history is he talking about? The one that wouldn’t let Jesse Owens into the White House? That of the Greatest Generation when our young men came back from the war to receive huge government benefits which built the middle class for White America only, while leaving Jim Crow in the South and housing discrimination in the North? It seems to me looking at the White House today that we are doing alright. At least those of us who aren’t complaining that we’re not so great anymore are doing just fine. We are doing just fine, thank you very much.

And watching the sitting President of the United States receive people at the White House to celebrate America’s unique cultural heritage, tell me whether you can think of a cooler place on Earth.

Filed under Essays, Obama 44, We The People 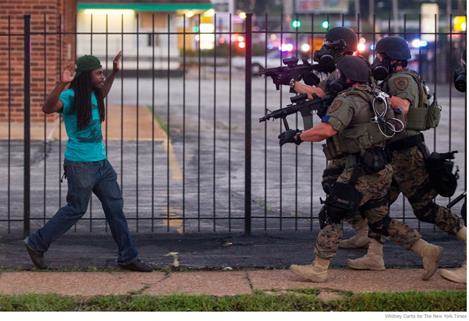 Today I had intended on writing something about Ferguson and how and why the Revolution would begin. I was going to explain how the system is supposed to work: prosecutors belong to the executive branch with the communities they serve as their constituents. When there is a murder or an alleged crime and the community wants a trial, the prosecutor practically has a political duty to try the case. And in a case like the Brown one where the facts are very much open to interpretation, the only way for a satisfactory resolution is for a trial where the community – in the form of the jury – can listen to the presentation of the facts and the witnesses and render a verdict based on the standards of that community. In what I thought was going to be a profound observation, I was going to note that this was clearly not the case in Ferguson, and has not been the case in almost any of the other countless instances where an unarmed black male lay dead at the hands of the police. And this, this ultimate failure – arguably deliberate – in the system was what would eventually lead to the Revolution. Heck, less than that led the Revolutionary War in 1776.

But then I read Ta-Nehisi Coates reflection on the matter. Absolutely no one writes better about race in America today than Coates. Just a few highlights:

What clearly cannot be said is that violence and nonviolence are tools, and that violence—like nonviolence—sometimes works. “Property damage and looting impede social progress,” Jonathan Chait wrote Tuesday. He delivered this sentence with unearned authority. Taken together, property damage and looting have been the most effective tools of social progress for white people in America. They describe everything from enslavement to Jim Crow laws to lynching to red-lining.

“Property damage and looting”—perhaps more than nonviolence—has also been a significant tool in black “social progress.” In 1851, when Shadrach Minkins was snatched off the streets of Boston under the authority of the Fugitive Slave Law, abolitionists “stormed the courtroom” and “overpowered the federal guards” to set Minkins free. That same year, when slaveholders came to Christiana, Pennsylvania, to reclaim their property under the same law, they were not greeted with prayer and hymnals but with gunfire.

“Property damage and looting” is a fairly accurate description of the emancipation of black people in 1865, who only five years earlier constituted some $4 billion in property. The Civil Rights Bill of 1964 is inseparable from the threat of riots. The housing bill of 1968—the most proactive civil-rights legislation on the books—is a direct response to the riots that swept American cities after King was killed. Violence, lingering on the outside, often backed nonviolence during the civil-rights movement. “We could go into meetings and say, ‘Well, either deal with us or you will have Malcolm X coming into here,'” said SNCC organizer Gloria Richardson. “They would get just hysterical. The police chief would say, ‘Oh no!'”

The fact is that when the president came to the podium on Monday night there actually was very little he could say. His mildest admonitions of racism had only earned him trouble. If the American public cannot stomach the idea that arresting a Harvard professor for breaking into his own home is “stupid,” then there is virtually nothing worthwhile that Barack Obama can say about Michael Brown.

And that is because the death of all of our Michael Browns at the hands of people who are supposed to protect them originates in a force more powerful than any president: American society itself. This is the world our collective American ancestors wanted. This is the world our collective grandparents made. And this is the country that we, the people, now preserve in our fantastic dream. What can never be said is that the Fergusons of America can be changed—but, right now, we lack the will to do it.

Filed under Obama 44, We The People

Except for his skin color, Barack Obama has looked like the perfect Republican. On practically every issue Republicans say they care about, Obama has out-shined his predecessors:

So where is the Marxism? Where is the Shari’a? Where is single payer? Why is everyone around the world still drinking Coke and doing business in English? There’s plenty for Democrats to dislike, but not much for conservatives. So what is it exactly that Republicans find so problematic with Obama?

Via Glenn Greenwald, the above graphic illustrates just how tribal American politics can be.

As mentioned before, we love pointing to the Iraqis and rationalizing our invasion of their country by saying, “We didn’t destroy their country, they did because they are tribal and barbarian.” But take a look at the American civil war in the 1860s, the Spanish civil war in the 1930s, the Pan-European civil war that was World Wars I and II, and you see that it doesn’t take much to turn neighbor against neighbor in horrible bloodshed, even in the most Christian of lands.

When I look at today’s tribalism in America – where the president is incessantly accused of being a socialist crpyto-Muslim who wants to sentence grandma to a death panel and end America as we know it, despite repeatedly proving himself as a status-quo worshiping, pro-business, pro-defense industry, pro-Israel politics-as-usual All American politician – I often wonder what it would take for the U.S. to fall into the type of murderous political chaos that has afflicted places like Iraq, Afghanistan, Libya or anywhere else that has been blessed with liberation.

Deep down inside and even on the surface, we ain’t so different.

Filed under Digressions, Obama 44, We The People

Suffice it to say that it has been interesting to witness the different reactions to the recent leaks that the NSA is acting in conjunction with private companies to monitor our private conversations. These reactions have been more than predictable. Besides the obvious game of mirrors where Democrats (including Obama himself) who used to loath Bush and were tearing their hair out over the Patriot Act are now blindly defending the Obama administration’s expansion of the Surveillance State, you also have the mainstream, establishment media in a love affair with government secrecy, their arguments being that:

It all makes you wonder which side of the fence the David Brooks, David Frum, Tom Friedman, Andrew Sullivan and others like them would have been on back between 1776 and 1791 when the American people were fighting for, amongst other freedoms, the freedom against government intrusion into their homes and personal lives. Their full defense of surveillance and secrecy is tantamount to siding with both King George and Big Government. Why is it that the guys who most hate our values are not the terrorists but the chicken hawks who are willing and eager to sacrifice our values as soon as a buffoon plants a faulty bomb in his underpants.

Now, I know that I repeatedly promise to steer clear from these American political issues and focus more on life in Europe, but I think that as an American living abroad, I am particularly affected by the Surveillance. So here are my two cents: END_OF_DOCUMENT_TOKEN_TO_BE_REPLACED

Filed under Essays, Obama 44, We The People