Leave Real Madrid or How to Beat el Barça 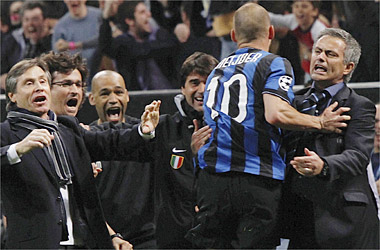 It is continuously difficult to find a good argument – other than purely economic – to convince the top football players to join Real Madrid, especially after Inter de Milan just beat FC Barcelona in the first leg of the European Champions League semifinals.

As you may recall, less than two weeks ago Real Madrid suffered a 0-2 defeat at home to its top rival, Barça. This was its second loss to Barça this season. This past year, Real Madrid spent over €300 million on new signings, including Cristiano Ronaldo, Kaka, and others but instead of victory, it has begun to resemble the U.S. military; in other words, a ridiculous budget that overshadows its competitors and yet it can’t seem to defeat even the most modest of cave dwelling rivals. I am starting to think that Florentino’s Plan B is to simply buy the entire Barça squad, coach Guardiola included, and dress them all in white; kind of like the U.S. military paying the Iraqi insurgents not to fight (aka, the Surge).

At the end of its spending spree last summer, Real Madrid then dumped Arjen Robben and Wesley Sneijder, both of whom have played major roles in leading their respective new teams to the European Champions League semi-finals (and possibly beyond), while Real Madrid was eliminated ages ago. Furthermore, Sneijder in signing with Inter de Milan has joined a roster that includes a host of Real Madrid ex’s, including Esteban Cambiasso, Walter Samuel, Samuel Eto’o and Luis Figo (now in retirement but acting as a club representative). With Inter’s victory tonight over Barça, and Real Madrid’s continued losing streak against Barça, you kind of wonder what’s left in the arsenal of a Real Madrid player? I guess the easiest way to beat Barça is to just leave Real Madrid and play for somebody else. 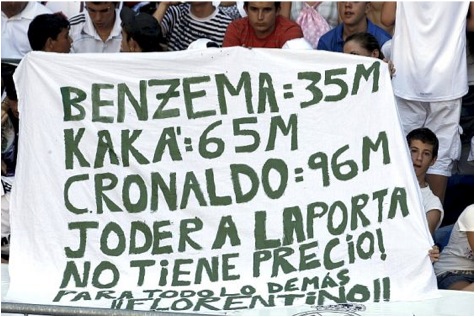 So it might not be the most civil of rivalries, but this sign at today’s Real Madrid/Cristiano Ronaldo presentation in front of some 85,000 people was pretty funny:

Especially considering that Laporta has been complaining to the press about how much Real Madrid has spent, and even the Spanish President, Zapatero, has publicly criticized Florentino, it is all the more priceless. Real Madrid has indeed spent an offensive amount on these new players, and will most likely spend more, but still Zapatero, as an avid and vocal Barcelona supporter, has once again proven himself to be a total buffoon. 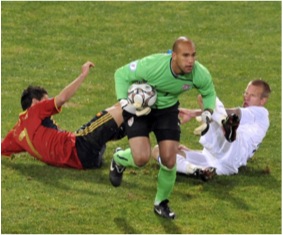 It’s ironic that the entire spirit and competitive structure of American professional sports is effectively socialism in practice – its anti-trust violating franchise system, player drafting, revenue sharing, salary caps, player unions, etc – while the European model is almost pure capitalism where only the fittest of the fittest survive, the rich teams always get richer, and the individual athletes have very limited bargaining power.

And guess who wins? Contrary to every belief dear to an American’s heart, the socialist, even communal American model, with its unexportable and indigenous sports, outperforms the Europeans every time. While American football, baseball, and basketball generate astronomical revenues, Europe’s under regulated football is an ongoing soap opera of corruption, scandal, negative balance sheets, and losses.

The Summer of George

So far it has been a great Summer for Spain. The Spanish national soccer team won the European Cup, and Rafael Nadal just won Wimbledon. You could also say that I have had a great Summer so far. During June alone, I traveled non stop between Madrid and Paris, and have been in Rabat and Rome.

As a matter of fact, I have only spent one out of the past six weekends in Madrid. Ironically, it doesn’t feel much like Summer to me right now. I am looking out the window at a rainy, cold and windy day in Paris. It is 65ºF and feels more like October than July. Meanwile in Madrid — where I am spending an average of two to three days a week — it is 90ºF with clear skies.

At least my summer is better than the Summer of George.

Spain and Ahab’s Wife at a Crossroads 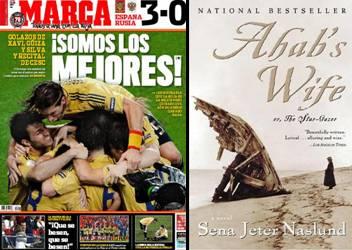 I am about half way through (around page 300 of 600) Ahab’s Wife: Or, The Star-gazer. The novel, one of my mother’s favorites, had been lying dormant for years on my book shelf until a week or so ago when I decided to open her up and give some air to pages. After a slow start, I am finally fully involved in its development.

Then right when Una, the story’s main character, was at last about to touch land after a dramatic voyage at sea, Spain convincingly beat Russia 3-0 in the European Cup semi-finals. This victory marks a major change in the Spanish national soccer team’s history of disappointing performances in major international competitions.

The moment the match ended, the spontaneous festivities broke out in the streets of Madrid. Outside my window, it sounded like a mix between a war zone (firecrackers and car alarms), San Fermines, and a fascist pep rally. Although I am not the biggest fan of patriotic boasting, reaching the finals of the European Cup is a major ego booster to a (soccer-loving) nation and source of pride and future bragging rights.

But amidst all of the cheering and chanting (“que viva España” and “a por ellos, oé”) and celebrations, I kept wondering how people could so openly rejoice after everything that Ahab’s wife, Una, had just been through and everything that awaits her ashore. It just goes to show that we live in little bubbles isolated from our own immediate surroundings, like a raft alone in the open sea.

Roberto Carlos leaves Madrid after 11 consecutive years (including 3 European Champions League titles), the longest ever period for any foreign player with Real Madrid.

Becks leaves for LA after 4 years with Real Madrid, without ever complaining or uttering a bad word about anyone. Not the greatest player in the world, but definitely a gentleman and a true professional.

La Liga is Not Apt for the Weak Hearted 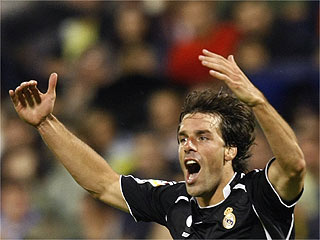 Tonight, Real Madrid played Zaragoza in Zaragoza, and FC Barcelona played at home against El Real Deportivo Espanyol de Barcelona. Zaragoza also needed to win in order to assure its qualification for Europe. Furthermore, Zaragoza is full of ex-Real Madrid players (Cesar, Savio, Celades, Juanfran, and Diogo) and Gabi Milito (who had signed with Real Madrid but was then rejected last minute because of “medical reasons”), so the match was also personal. And obviously, FC Barcelona versus El Espanyol is an important inter-city rivalry.

In the US, people think that European football is boring, lacks emotion … Quite the contrary, tonight was a roller coaster, not apt for the weak hearted. END_OF_DOCUMENT_TOKEN_TO_BE_REPLACED