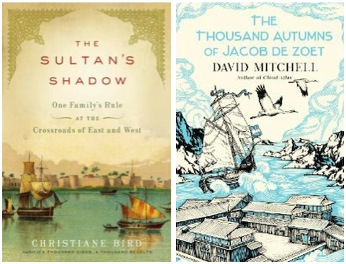 I have recently finished reading The Sultan’s Shadow: One Family’s Rule at the Crossroads of East and West by Christiane Bird and Geoff Dyer’s ode to Jazz, But Beautiful. The Sultan’s Shadow was slow at the beginning, often with great emphasis placed on things that had little interest to me (like the details of the Sultan’s palaces in Zanzibar), but overall was a compelling read about a time and place in history that I know almost nothing about: Eighteen Century Zanzibar and East Africa, Omani control over the region and the entrance of European Colonialism, the East African slave and ivory trades, and the British fascination with locating the source of the Nile.

But Beautiful was more of a mix bag. At times, I felt that Dyer was simply trying too hard or that his fictionalized vignettes of the historic accounts of famous Jazz musicians did not always add to a greater understanding of musicians or their craft. For example, the story related to Thelonious Monk reads identical to the Straight No Chaser documentary. On the other hand, I thoroughly enjoyed the portrayals of the Lester Young and Charles Mingus. If there was an overall theme it was that the the underlying tragedy of the Jazz musician — beyond even that of racial oppression — was addiction, vitally affecting each character and, instead of enhancing their performance, ultimately inhibiting it (maybe with the sole exception of Mingus whose addiction and principle personality trait was to devour everything in his path). Finally, although I did not particularly enjoy the piece on Chet Baker (mainly influenced by the haunting Let’s Get Lost documentary), I found Dyer’s analysis of Baker’s aesthetic as a sign of his inability to express either beauty or compassion as quite interesting.

And now – due mainly to the fact that for a number of personal reasons I am in a rush to read as much as possible by the end of the year – I have continued to add new books to my list. Like an insensitive ex, I have shamelessly moved on. I have already started David Mitchell’s new The Thousand Autumns of Jacob Zoet, about the Dutch trading post at Dejima, Japan at the turn of the 18th and 19th centuries. As always with Mitchell, the beginning is slow as I adjust to whatever vernacular he has created for his story, and then it picks up very quickly. New on my roster are:

These, of course, fighting on deck with the books I have yet to get to from the previous lists.