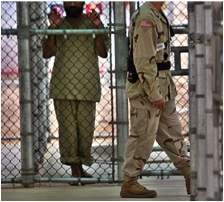 Welcome to the Obama justice system where you can be found “not guilty” and still stay imprisoned for as long as the president wants. Now it’s hard for me to believe that Obama, with all of his legal training, does not understand the inherent dangers and inconsistencies in this position. But, like with the War in Afghanistan, Obama’s policy is completely based on political expediency — to prove he’s a tough guy and appease American blood lust and childish anxieties — and not on the validity of the policy.