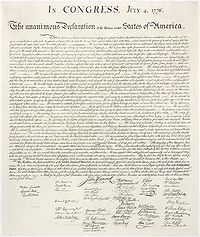 Ever since I was a kid I always loved the Fourth of July. At first, of course, I liked the fact that my grandmother let us play with minor pyrotechnics (i.e., sparklers) that we’d put out in the pool with a sizzle. But, even at a young age I had an appreciation for the central figure of the holiday, the Declaration of Independence. And as I got older, I grew even more impressed with our founding document.

With such efficiency of language, the Declaration of Independence beautifully sets forth — what I believe to still be true up to the present day — the fundamental underlying relationship that ties the state to the people its governs. And being the inherently legal document that it was, the Declaration lists the ways in which the King of England had violated that bind, and therefore the people had a “[right and duty] to throw off such Government, and to provide new Guards for their future security.”

While watching the moving protests in the streets of Tehran and, at the same time listening to the same pundits who just recently wanted us to obliterate Iran now show the Iranians their heartfelt support, I kept thinking about America’s own revolutionary past and its present dislike for armed revolution.

Contrast that of course with those who believe that the Second Amendment grants a private right to bear arms precisely so that if oppressed the people can revolt against their own government. Surely, were we to go back in time to 1776, the American revolutionaries, especially the Minutemen who were fighting guerrilla warfare, would today have been considered at the very least insurgents. Nevertheless, there would be few American politicians who would ever support allowing, for example, for the Iraquis or Palestinians to freely bear arms.

But for the sake of argument, were either the Iraqui insurgents or the Palestinian militias to stop all attacks on civilians and focus strictly on military targets would they then cease to be deplorable terrorists and become American-style revolutionaries? How about if they protested peacefully would they then also gain our compassion as the Iranians did?  Or do we only like those who protest our enemies and not our friends, regardless of whether they live under foreign military occupation or apartheid?

This leads to another question I have been thinking about a lot lately: are we Americans able to accept that our own government, like other nations, is capable of committing human rights violations? Why is it that when other countries torture prisoners, it is torture and when we do it, it is enhanced interrogation? How can the New York Times call Iranian interrogation tactics “torture” but not the very same tactics that the U.S. has admitted to have used against detainees in Guantanamo and elsewhere.

Virtually every tactic which the article describes the Iranians as using has been used by the U.S. during the War on Terror, while several tactics authorized by Bush officials (waterboarding, placing detainees in coffin-like boxes, hypothermia) aren’t among those the article claims are used by the Iranians.  Nonetheless, “torture” appears to be a perfectly fine term for The New York Times to use to describe what the Iranians do, but one that is explicitly banned to describe what the U.S. did.  Despite its claimed policy, the NYT has also recently demonstrated its eagerness to use the word “torture” to describe these same tactics . . . when used by the Chinese against an American detainee.

Why are we so disgusted when Iran or North Korea imprison a foreign journalist, but when we put one in Guantanamo without trial it goes unreported? Why is it not considered a gross violation of our fundamental principles when we detain suspects in far away black sites that are secret for the very purpose of hiding from the law. If rights are inalienable, then shouldn’t they be inalienable everywhere?

4 responses to “Reflecting on Independence”