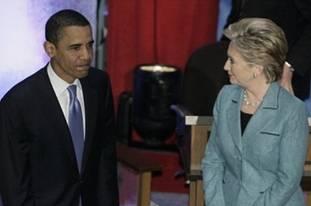 Last night’s debate was absurd and one sided, as ReWrite correctly points out. Laila Lalami sums it up pretty well by as having been “Upside Down“:

Four million people have been displaced in Iraq, as many as a hundred and fifty thousand have been killed, food prices are causing riots around the world, the economy is in the can, crude oil is at $115 a barrel, and what do talking heads want to know? Why Obama doesn’t wear a flag pin on his lapel.

Hillary went so far as admitting that she can’t win by acknowledging that there was a reason why she was “still in the race”. What she didn’t explain after saying that she would not have chosen Jeremiah Wright as her pastor was why, on the other hand, she did hire Mark Penn as her Senior Campaign Strategist — the lobbyist who has represented Blackwater and Colombia.

It’s all getting just too silly. Why Obama was drilled for knowing a Clinton pardonee or about his relationship to the flag is anyone’s guess. I guess Carville accusing Bill Richardson last month of being a Judas must have really scared George.

REGARDLESS of what happens Tuesday in the Democratic presidential primary in Pennsylvania, Hillary Clinton will not quit. Call it Divine Right or chutzpah, the Clintons believe she is entitled to the presidency. They’ve been planning it since their days at Yale.

They are also convinced Barack Obama will be clobbered in a general election, on a par with George McGovern and Michael Dukakis.

Ties that bind. Clinton campaign leaders regard quitting as an admission that they couldn’t elect a once-sure thing. Think of it: No interviews on the Sunday talk shows. No best table at the best DC restaurant. And no Redskins tickets.

For the Clintons, dropping out would be a career catastrophe. If Obama wins the nomination and the election, and gets reelected, Hillary, 60, would have to wait eight years to run again. Meanwhile, Obama will control key jobs in the federal government and the Democratic Party machinery.

He’s too wrong. Clinton insiders argue that Obama will lose because he’s African-American, weak with Hispanics, too liberal, too exotic, and too close to a deranged preacher, a corrupt developer, and an unrepentant ’60s radical Weatherman. Don’t know the Weathermen? You will.

The Wright stuff. The bizarre rants of Obama’s former pastor, the Rev. Jeremiah Wright, are the subject of the Clinton superdelegate sales pitch. President Clinton and Harold Ickes are saying Wright makes Obama unelectable in the fall.

An elephant on a waffle. Obama’s gaffe in San Francisco, saying people in small-town America are bitter about their circumstance, is largely true. It was the thesis of “What’s the Matter with Kansas,” an influential book on how Republicans get Middle Americans to ignore their economic self-interest. Clinton jumped on the gaffe like an elephant on a waffle.

Black man as elitist. Hillary Clinton, whose combined eight-year income with her husband was $109 million, called Obama an elitist and out of touch. In his attempt at pop-sociology, Obama became a “San Francisco Democrat,” GOP code for ultra-liberal. Obama gave Clinton new ammunition, especially for superdelegates, who may have more to say about her future than voters.

Hillary’s San Francisco moment. In November, Time.com quoted Hillary as saying, “During the 1990s, I cannot remember being asked about immigration. Why? Because the economy was working. And average Americans didn’t have to go around looking for others to blame.”

Archie Bunkerism. Clinton is doing well with Pennsylvania’s white ethnics, blue-collars, and gray-hairs. Caucasian pundits, led by ex-Philadelphian Chris Matthews of MSNBC, believe the state wants a plain-spoken, die-hard, self-described fighter (Clinton), not a fancy-talking Harvard-educated black elitist with a funny name who can’t bowl and has a crazy preacher.

What’s the damage? So far, none. A new Los Angeles Times/Bloomberg poll, taken during the small-town flap, showed Obama trailing by only 5 points in Pennsylvania. He won’t win Pennsylvania, but it’s because of the anti-black or “hidden” vote.

How would Hillary do? She would begin a fall campaign with nearly half of all voters saying they can’t stand (or trust) her. Her Tuzla sniper fire myth – inexplicably regurgitated by her husband, embellished with four falsehoods – will be particularly damaging against warrior McCain. And those dubious characters Bill Clinton has taken money from as ex-president? Some can charitably be called sleazy.

Monica. Obama has been an absolute gentleman for not even hinting at sex in the Oval Office with a 19-year-old intern. McCain won’t mention it. Independent groups will do it for him. The kind that made Willie Horton and Swiftboats famous.

The co-pilot. McCain will attack Bill Clinton’s foreign policy misadventures in Rwanda, Somalia, Haiti, and Kosovo. And Hillary will be pilloried for saying she was there every step of the way.

“Get your hand off that Bible!” Because the Clintons believe Obama could be destroyed at any moment, she will never quit. On “Saturday Night Live,” the Hillary character declares: “I’m not jumping out of this until the inauguration. And even then, I won’t be gracious.”

Dan Payne is a Boston-area media consultant who has worked for Democratic candidates around the country. He does political analysis for WBUR radio.

2 responses to “Upside Down”