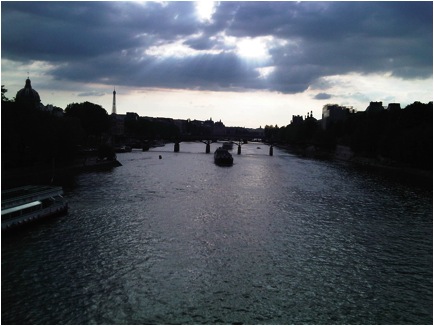 I have a developed a system, a pattern of behavior, an M.O. for my habitual weekend trips to visit my wife in Paris. Delays notwithstanding, the voyage takes me roughly five hours from door to door. Here is my story:

The night before, the routine begins. I charge the battery for my Bose noise reduction headphones and begin to pack. Into my sole carry-on go one of each species of clothing for each day I will be away, with the exception of pants and sweaters/sweatshirts which are apportioned on a one per two or three day basis, depending on the total length of the stay and weather forecast. Next, I prepare my paperwork (passport, print-out boarding pass, etc) and pack my little medicine quit and cables (for phone, iPod, camera, etc). Finally, I select about one hour’s worth of music, usually divided amongst two or three Jazz musicians, for my iPod Shuffle.

The next morning before leaving for work, I finalize the packing process. I pack a toothbrush and deodorant, the book that I am presently reading, the Bose headphones, and put a pair of sneakers in a plastic bag. I then update my podcasts, and upload at least three hours worth of podcasts onto the iPod Shuffle. I unplug the TV, broadband, and other appliances and electronics that are usually left on standby (which can amount to something like 13% of a household’s energy consumption), close shop and head off to work.

Two hours before my flight, I change out of my work shoes and pants and into my jeans and sneakers, and then leave for the metro. From work it normally takes me forty minutes, including the walk to the metro, and two station changes, to get to the airport, but I allot one hour, just in case. At each station change, I have learned to calculate the optimal path, including locating which car’s doors open closest to the hallways leading from one line to the other, to achieve the most efficient throughput time.

When I arrive at the airport, I walk directly to the security area leading to the gates, as I already have my boarding pass and don’t need to check any luggage. During the walk, I begin to remove my watch, wallet, belt, keys, and iPod and put them in the side pocket of my suitcase. Once through security, I usually have about one hour until boarding. I find something to buy for my wife and her sisters (usually turrón or gossip magazines), and then sit and read next to the gate. Once the incoming plane arrives and its passengers disembark, I then calculate about twenty-five minutes for my flight to be ready for boarding, and fifteen minutes later I go to use the bathroom (I hate having to go to the bathroom on short flights), and put on my sweater (I freeze on planes).

When it is time to board, I get into the priority line (I don’t fly business, but I have accumulated priority boarding privileges) and take out my book, headphones, and traveling documents which I will keep me with during the flight. Once on the plane, I stow my suitcase, take my incredibly cramped window seat, and call my wife to tell her that I have boarded and whether we are on time. I then read my book throughout the announcements and take off. When the “fasten seat belt” light turns off (or after ten minutes in flight whichever comes first), I stop reading, remove my iPod from my pocket, switch its crappy headphones for the Bose, and listen to podcasts. When the food/beverages cart comes my way, I almost always say, “rien, merci”. The flight from Madrid to Paris is usually 1.40 depending on the tailwinds, and I spend the majority of the flight uncomfortable, fidgeting, anxious, wishing this period of back-and-forth would finally come to an end, and looking at my watch to see how much time is left. When there are thirty minutes left, the captain lets us know we have started our initial approach, and with about fifteen minutes left, the “fasten seat belt” light comes on again, meaning that I have to turn off my iPod and headphones. Unlike Madrid where taking off and landing is generally accompanied by turbulence, landing in Paris is fairly smooth, so I either spending the last fifteen minutes reading or looking out the window.

Hopefully we park at the gate and don’t have to take a shuttle bus. I then collect my things, and do my best to be position myself as to avoid the people from the seats behind me butting to get off the plane out of turn. A lack of civility respecting one’s turn in line is one of the great traits of contemporary European culture (Italians being by far the worst). I turn on my phone, grab my suitcase, and am on the move. I am happy. I call my wife to tell her I have arrived, I put on my iPod, now back to the bad headphones, and haul ass. I go through the hallway, down the escalator, past the baggage claim and out the doors. Now I have about 400 meters to trek to the train station. I take a quick pit stop to use the bathroom, and then I walk full speed forward. I rush down the first long hallway, up the escalator and then down another long hallway, swerving between people and passing them on the people mover, hoping that they don’t stand to the left (against the very fabric of the social contract). At the Paul bakery, I turn left, descend two more escalators, and search for a ticket machine that is not out of order. I purchase my train ticket for Paris (€8.70), go through the turnstile and down the steps to the platform. There are two trains, one that is more direct and the other that stops at every station between the CDG airport and Les Halles/Chatelet where I get off. The slow train takes about 45 minutes and the express one takes about thirty. I check the estimated schedule, do the math and usually chose the express train.

Once on the train (window seat facing forward), I call the wife again to give her my ETA. And then I usually smile. I love this moment. Even though the train is old and uncomfortable, and there is nothing to see along the route (it is usually night time when I arrive), I enjoy sitting there staring out into space and listening to Jazz for the next thirty minutes to an hour. If I take the express train, it is usually populated by tourists coming to Paris, French people returning from vacation, and airport workers going home after a long day at work. If I take the slower train, the tourists are mixed with French and immigrant (usually from Africa) commuters. After passing some ugly public housing complexes and the Stade de France station, there is a quick glance of the Sacre Coeur in the distance, and then the train enters a tunnel heading to Gare du Nord. Now I feel like I am in New York City. The station is grimy, and the underground air smells stale and of burnt rubber. And best of all, what most makes me most feel like I am in NYC, unlike say being in Spain, is the mix of races (white, black, Indian, and Asian). One more stop and we arrive at Les Halles/Chatelet. Exit train, left hand side.

I find the closest stairs or escalator, follow the signs for Place Carrée, go through the turnstile, up another escalator, through two more sets of doors and into the indoor Place Carrée of the Forum Les Halles. I travel up one escalator, past a few homeless, and finally up through the last escalator and into the Parisian night. I head straight forward, full speed ahead towards the Seine, just a few blocks away. I am in Paris and Paris is, well, Paris. Five minutes later, I type in the building code, open two sets of doors and head up the stairs. I get to the door, ring the bell, and there waiting for me is my final destination. The next thing I know, the weekend is over. The way back is a different story. But I won’t go into detail. There isn’t as much to look forward to.