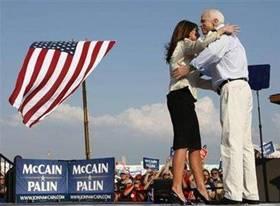 Just when I had thought that the DNC Convention was a total load of dung, then the GOP came to the rescue with two statements that have left me shocked by the shere extent of their cynicism: first, the vice presidential candidacy of Governor Palin, and second that Bush would not be speaking at the GOP Convention (the president was too concerned — albeit a few years tardy — with the weather).

I suppose that after watching Hillary, Bill, and then Obama (i) highlight the historic importance of Obama’s candidacy and then (ii) detail how the Bush Administration has deteriorated the country, the McCain people scrambled to adjust their convention’s agenda. Pick a woman, hide Bush under the carpet, and avoid looking like what they are: old, white, and crusty.

Having met Palin only twice and interviewed her at the very last minute, McCain determined that, at such an important historic moment and after considering every other potential choice in a nation of close to 300,000 million inhabitants, Governor Palin was his perfect vice-maverick. First Lady, Laura Bush, rushed to praise Mrs. Palin. I am paraphrasing here, but Mrs. Bush thinks Palin is just precious. Laura knows her well; they’ve met a couple of times (in other words, twice). They sat at the same table last year. Now, that is some heavy vetting if you ask me.

Tom Brokaw, who has proven himself to be a more serious yet less likeable interrogator than Tim Russert, thankfully asked the serious questions to McCain Palin surrogate Tim Pawlenty:

MR. BROKAW: I don’t want to stress the weather metaphor too far, but we had a thunderstorm of epic proportions last Friday when John McCain unexpectedly announced that Sarah Palin, the governor of Alaska, would be his running mate. We want to begin with that here this morning, if we can. To borrow a phrase from your profession, the legal profession, let’s you and I agree that we can stipulate certain things, OK? She is a conservative and pragmatic politician. She’s been tough on corruption in Alaska. She’s popular with a winning style and personality. But the fact is that she has been governor less than two years and before that she was a mayor of a town with a population of less than 7,000. Her candidate at the top of the ticket has the bull of a constitution–has the constitution of a bull elephant, but he is a 72-year-old man and a cancer survivor. She will be a heartbeat away from the presidency. This country is engaged in two wars, it’s facing a resurgent Russia, a rogue Iran, a financial crisis that may be the greatest since the Great Depression. I think our viewers want to know what’s in her background that prepares her for dealing with all that and the possibility that she would have to step up into the Oval Office?

GOV. PAWLENTY: Well, first of all, I think Senator McCain, of course, one of his main attractions and assets and strengths that he’s a maverick with a record of reform. She’s a maverick with a record of reform. And if you look at her background and I know her a bit as a fellow governor, she’s an individual who is smart, she’s strong, she’s capable, she’s dedicated, she’s diligent and she has executive experience. She’s functioned as a governor, she’s the commander in chief of a national guard, she’s a former mayor, she’s the former chair of an energy commission in Alaska, which is one of the more high-profile issues and operations in Alaska. She’s deeply involved in the energy issues, which is really one of the foremost national security issues we have in our country in terms of its connection to transference of wealth to places like the Middle East and Russia and Venezuela. So she is somebody who I think is very capable to be in the executive position. And one last thing, Tom, she’s running for vice president. She has as much or more experience as Barack Obama, who’s running for president.

MR. BROKAW: But Barack Obama has been before the American people for more than 20 months now. He has debated 20-some times against some very tough opponents. He’s participated in one-on-one interviews around the world. He’s been vetted, in effect, by the American people, and in most national polls he continues to lead your candidate by a small margin. But people have made some judgments about him and they’ve not had that same kind of exposure to Sarah Palin. Let me just ask you, quickly, do you think that she would be better on the economy than Mitt Romney, who was a successful entrepreneur and governor of Massachusetts, or better on terrorism than Tom Ridge, the former governor of Pennsylvania, who also ran Homeland Security? Or better, in a lot of matters at the national level, than Joe Lieberman, who is John McCain’s close friend from the Democratic Party who’s been supporting your party?

Now I couldn’t care less about whether the Alaskan governor’s daughter was pregnant or not. That’s none of my business, but pre-marital sex happens to have been a real issue in the past for Republicans, as Maureen Dowd screwdly reminds us:

It seems like a long time since Vice President Dan Quayle denounced Murphy Brown for having a baby out of wedlock, bemoaning a “poverty of values.” It also seems like a long time — and another McCain ago — that Republicans supporting W. smeared the old John McCain by spreading rumors that he had fathered an illegitimate black child.

This week, the anti-abortion forces celebrated the news of Bristol’s pregnancy, using it as further proof that their beloved Governor Palin — who will no more support sex education than polar bears — was committed to the cause.

Ricard Cohen points out the irony in the Republican’s celebration of Palin’s considerate support of her daughter’s decision to keep the baby. Oh yeah, that’s right, under Republican doctrine, there is no choice but to keep the child:

On the MSNBC program “Morning Joe,” one of the Andrea Mitchell triplets — one works the morning shift, one the afternoon and the other the night — sternly cautioned me and other media types that the pregnancy of 17-year-old Bristol Palin is a strictly private family matter. Less importantly, Barack Obama made the same argument, saying that family — and especially kids — are off limits. I could not agree more.

Nonetheless… May I suggest that the Plight of the Palins — sounds like an old time movie serial — says something about the Palins themselves and their politics. And since their politics is the politics of the GOP and those assembled in St. Paul, we have a right, and perhaps even an obligation, to comment on this matter.

For while the Palins are free to handle this situation in the way they see fit — Bristol will carry to term and marry the father — the same sort of freedom is not what they would permit others. Specifically, if the Palins had their way, the countless teenagers who get accidentally pregnant would not be able to have an abortion. What’s more, the intended fathers might have to decide at an awfully young age to marry the woman in question. This is not always a beautiful event, as the Palins apparently call just about every setback in their lives, but often a catastrophe.

And finally and please, I can’t stomach hearing Mrs. John McCain or anyone else tell me that due to Alaska’s proximity to Russia, Palin has keen insight into Russia and foreign policy. Nobody is that stupid, but plenty are that desperate to believe even the most cynical of campaign propaganda.

McCain would like us to believe that this election is about judgment (including, not his judgment to enter a war that would pay for itself, but his judgment to send more troops to a war over oil), but he has just used his judgment to select a running mate he does NOT know who could potentially become the next commander-in-chief.

The fact of the matter is that McCain was that desperate. Time will tell whether the American people are that dumb.