The Press, Obama and McCain 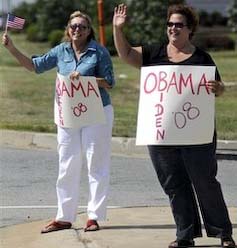 As I have mentioned previously, the press may talk more about Obama than McCain, but they are easier on McCain. Regardless of the evidence, it is always Obama who has problems with women, white men, and is fairing poorly in the polls. Obama is an unknown entity, and we all know exactly what McCains thinks and/or will do as president. As Frank Rich writes today in the New York Times,

What we have learned this summer is this: McCain’s trigger-happy temperament and reactionary policies offer worse than no change. He is an unstable bridge back not just to Bush policies but to an increasingly distant 20th-century America that is still fighting Red China in Vietnam and the Soviet Union in the cold war. As the country tries to navigate the fast-moving changes of the 21st century, McCain would put America on hold.

What Obama also should have learned by now is that the press is not his friend. Of course, he gets more ink and airtime than McCain; he’s sexier news. But as George Mason University’s Center for Media and Public Affairs documented in its study of six weeks of TV news reports this summer, Obama’s coverage was 28 percent positive, 72 percent negative. (For McCain, the split was 43/57.) Even McCain’s most blatant confusions, memory lapses and outright lies still barely cause a ripple, whether he’s railing against a piece of pork he in fact voted for, as he did at the Saddleback Church pseudodebate last weekend, or falsifying crucial details of his marital history in his memoirs, as The Los Angeles Times uncovered in court records last month.

Is a man who is just discovering the Internet qualified to lead a restoration of America’s economic and educational infrastructures? Is the leader of a virtually all-white political party America’s best salesman and moral avatar in the age of globalization? Does a bellicose Vietnam veteran who rushed to hitch his star to the self-immolating overreaches of Ahmad Chalabi, Pervez Musharraf and Mikheil Saakashvili have the judgment to keep America safe?

And then there is the POW card that McCain plays, as Maureen Dowd, explains

His campaign is cheapening his greatest strength — and making a mockery of his already dubious claim that he’s reticent to talk about his P.O.W. experience — by flashing the P.O.W. card to rebut any criticism, no matter how unrelated. The captivity is already amply displayed in posters and TV advertisements.

The Rev. Kirbyjon Caldwell, the pastor who married Jenna Bush and who is part of a new Christian-based political action committee supporting Obama, recently criticized the joke McCain made at the Sturgis Motorcycle Rally encouraging Cindy to enter the topless Miss Buffalo Chip contest. The McCain spokesman Brian Rogers brought out the bottomless excuse, responding with asperity that McCain’s character had been “tested and forged in ways few can fathom.”

When Obama chaffed McCain for forgetting how many houses he owns, Rogers huffed, “This is a guy who lived in one house for five and a half years — in prison.”

As Sam Stein notes in The Huffington Post: “The senator has even brought his military record into discussion of his music tastes. Explaining that his favorite song was ‘Dancing Queen’ by Abba, he offered that his knowledge of music ‘stopped evolving when his plane intercepted a surface-to-air missile.’ ‘Dancing Queen,’ however, was produced in 1975, eight years after McCain’s plane was shot down.”The Kerry Swift-boat attacks in 2004 struck down the off-limits signs that were traditionally on a candidate’s military service. Many Democrats are willing to repay the favor, and Republicans clearly no longer see war medals as sacrosanct.

In a radio interview last week, Representative Terry Everett, an Alabama Republican, let loose with a barrage at the Democrat John Murtha, a decorated Vietnam War veteran who is the head of the House defense appropriations subcommittee, calling him “cut-and-run John Murtha” and an “idiot.”

The real danger to the McCain crew in overusing the P.O.W. line so much that it’s a punch line is that it will give Obama an opening for critical questions:

While McCain’s experience was heroic, did it create a worldview incapable of anticipating the limits to U.S. military power in Iraq? Did he fail to absorb the lessons of Vietnam, so that he is doomed to always want to refight it? Did his captivity inform a search-and-destroy, shoot-first-ask-questions-later, “We are all Georgians,” mentality?