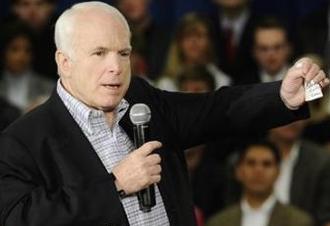 I find it absolutely laughable that Americans, the press, or any Republican or Democratic politician could somehow question Barack Obama’s patriotism or ability to act as president because he was a member of Reverend Jeremiah Wright’s church. Why are there people in the U.S. who are trying to turn Senator Obama into some kind of politican radical? What is going on here? For the time being let’s just call it laughable — to avoid calling it disturbing.

Hillary has more than her share of questionable cronies from back in the Arkansas days — even during the Clinton Administration. Nobody’s is taking another look there. Where is the outrage — other than Iran’s official protest before the U.N. — for her “obliteration” threat? When Chelsea was last asked about Monica Lewinsky, she moved away from the “that’s none of your business” response to the “my father’s behavior shouldn’t influence how you vote for my mother”. But if the press and pundits are asking why Obama chose Wright as his preacher for 20 years, shouldn’t they also ask Hillary why she decided to stay married for the past 10 years with her lying and cheating husband? You think it was to help her get elected? Seriously! Why is it that Hillary talking about her religion and her relationship to God is not too personal to share with the American people, but talking about Bill and her sham marriage is none of our business?

How about John McCain? The U.S. military has a horrendous record of segregation, discrimination, homophobia — not to mention invading foreign countries and murdering civilians, and yet no one is asking John McCain to justify his lifelong committment to the U.S. military. Why is no one outraged that McCain is “glad to have” Hagee’s endorsement?

I don’t think it is such a hard stretch for any American, white or black, to understand Wright’s frustrations with and anger towards a system that has abused a large percentage of American citizens. Should all presidential candidates distance themselves from African Americans who are angry about the past? How much more radical is what Wright has said than his white counterparts John Hagee or Pat Robertson?

May 4, 2008
Op-Ed Columnist
The All-White Elephant in the Room
By FRANK RICH

BORED by those endless replays of the Rev. Jeremiah Wright? If so, go directly to YouTube, search for “John Hagee Roman Church Hitler,” and be recharged by a fresh jolt of clerical jive.

What you’ll find is a white televangelist, the Rev. John Hagee, lecturing in front of an enormous diorama. Wielding a pointer, he pokes at the image of a woman with Pamela Anderson-sized breasts, her hand raising a golden chalice. The woman is “the Great Whore,” Mr. Hagee explains, and she is drinking “the blood of the Jewish people.” That’s because the Great Whore represents “the Roman Church,” which, in his view, has thirsted for Jewish blood throughout history, from the Crusades to the Holocaust.

Mr. Hagee is not a fringe kook but the pastor of a Texas megachurch. On Feb. 27, he stood with John McCain and endorsed him over the religious conservatives’ favorite, Mike Huckabee, who was then still in the race.

Are we really to believe that neither Mr. McCain nor his camp knew anything then about Mr. Hagee’s views? This particular YouTube video — far from the only one — was posted on Jan. 1, nearly two months before the Hagee-McCain press conference. Mr. Hagee appears on multiple religious networks, including twice daily on the largest, Trinity Broadcasting, which reaches 75 million homes. Any 12-year-old with a laptop could have vetted this preacher in 30 seconds, tops.

Since then, Mr. McCain has been shocked to learn that his clerical ally has made many other outrageous statements. Mr. Hagee, it’s true, did not blame the American government for concocting AIDS. But he did say that God created Hurricane Katrina to punish New Orleans for its sins, particularly a scheduled “homosexual parade there on the Monday that Katrina came.”

Mr. Hagee didn’t make that claim in obscure circumstances, either. He broadcast it on one of America’s most widely heard radio programs, “Fresh Air” on NPR, back in September 2006. He reaffirmed it in a radio interview less than two weeks ago. Only after a reporter asked Mr. McCain about this Katrina homily on April 24 did the candidate brand it as “nonsense” and the preacher retract it.

Mr. McCain says he does not endorse any of Mr. Hagee’s calumnies, any more than Barack Obama endorses Mr. Wright’s. But those who try to give Mr. McCain a pass for his embrace of a problematic preacher have a thin case. It boils down to this: Mr. McCain was not a parishioner for 20 years at Mr. Hagee’s church.

That defense implies, incorrectly, that Mr. McCain was a passive recipient of this bigot’s endorsement. In fact, by his own account, Mr. McCain sought out Mr. Hagee, who is perhaps best known for trying to drum up a pre-emptive “holy war” with Iran. (This preacher’s rantings may tell us more about Mr. McCain’s policy views than Mr. Wright’s tell us about Mr. Obama’s.) Even after Mr. Hagee’s Catholic bashing bubbled up in the mainstream media, Mr. McCain still did not reject and denounce him, as Mr. Obama did an unsolicited endorser, Louis Farrakhan, at the urging of Tim Russert and Hillary Clinton. Mr. McCain instead told George Stephanopoulos two Sundays ago that while he condemns any “anti-anything” remarks by Mr. Hagee, he is still “glad to have his endorsement.”

I wonder if Mr. McCain would have given the same answer had Mr. Stephanopoulos confronted him with the graphic video of the pastor in full “Great Whore” glory. But Mr. McCain didn’t have to fear so rude a transgression. Mr. Hagee’s videos have never had the same circulation on television as Mr. Wright’s. A sonorous white preacher spouting venom just doesn’t have the telegenic zing of a theatrical black man.

Perhaps that’s why virtually no one has rebroadcast the highly relevant prototype for Mr. Wright’s fiery claim that 9/11 was America’s chickens “coming home to roost.” That would be the Sept. 13, 2001, televised exchange between Pat Robertson and Jerry Falwell, who blamed the attacks on America’s abortionists, feminists, gays and A.C.L.U. lawyers. (Mr. Wright blamed the attacks on America’s foreign policy.) Had that video re-emerged in the frenzied cable-news rotation, Mr. McCain might have been asked to explain why he no longer calls these preachers “agents of intolerance” and chose to cozy up to Mr. Falwell by speaking at his Liberty University in 2006.

None of this is to say that two wacky white preachers make a Wright right. It is entirely fair for any voter to weigh Mr. Obama’s long relationship with his pastor in assessing his fitness for office. It is also fair to weigh Mr. Obama’s judgment in handling this personal and political crisis as it has repeatedly boiled over. But whatever that verdict, it is disingenuous to pretend that there isn’t a double standard operating here. If we’re to judge black candidates on their most controversial associates — and how quickly, sternly and completely they disown them — we must judge white politicians by the same yardstick.

When Rudy Giuliani, still a viable candidate, successfully courted Pat Robertson for an endorsement last year, few replayed Mr. Robertson’s greatest past insanities. Among them is his best-selling 1991 tome, “The New World Order,” which peddled some of the same old dark conspiracy theories about “European bankers” (who just happened to be named Warburg, Schiff and Rothschild) that Mr. Farrakhan has trafficked in. Nor was Mr. Giuliani ever seriously pressed to explain why his cronies on the payroll at Giuliani Partners included a priest barred from the ministry by his Long Island diocese in 2002 following allegations of sexual abuse. Much as Mr. Wright officiated at the Obamas’ wedding, so this priest officiated at (one of) Mr. Giuliani’s. Did you even hear about it?

There is not just a double standard for black and white politicians at play in too much of the news media and political establishment, but there is also a glaring double standard for our political parties. The Clintons and Mr. Obama are always held accountable for their racial stands, as they should be, but the elephant in the room of our politics is rarely acknowledged: In the 21st century, the so-called party of Lincoln does not have a single African-American among its collective 247 senators and representatives in Washington. Yes, there are appointees like Clarence Thomas and Condi Rice, but, as we learned during the Mark Foley scandal, even gay men may hold more G.O.P. positions of power than blacks.

A near half-century after the civil rights acts of the 1960s, this is quite an achievement. Yet the holier-than-thou politicians and pundits on the right passing shrill moral judgment over every Democratic racial skirmish are almost never asked to confront or even acknowledge the racial dysfunction in their own house. In our mainstream political culture, this de facto apartheid is simply accepted as an intractable given, unworthy of notice, and just too embarrassing to mention aloud in polite Beltway company. Those who dare are instantly accused of “political correctness” or “reverse racism.”

An all-white Congressional delegation doesn’t happen by accident. It’s the legacy of race cards that have been dealt since the birth of the Southern strategy in the Nixon era. No one knows this better than Mr. McCain, whose own adopted daughter of color was the subject of a vicious smear in his party’s South Carolina primary of 2000.

This year Mr. McCain has called for a respectful (i.e., non-race-baiting) campaign and has gone so far as to criticize (ineffectually) North Carolina’s Republican Party for running a Wright-demonizing ad in that state’s current primary. Mr. McCain has been posing (awkwardly) with black people in his tour of “forgotten” America. Speaking of Katrina in New Orleans, he promised that “never again” would a federal recovery effort be botched on so grand a scale.

This is all surely sincere, and a big improvement over Mitt Romney’s dreams of his father marching with the Rev. Dr. Martin Luther King Jr. Up to a point. Here, too, there’s a double standard. Mr. McCain is graded on a curve because the G.O.P. bar is set so low. But at a time when the latest Wall Street Journal-NBC News poll shows that President Bush is an even greater drag on his popularity than Mr. Wright is on Mr. Obama’s, Mr. McCain’s New Orleans visit is more about the self-interested politics of distancing himself from Mr. Bush than the recalibration of policy.

Mr. McCain took his party’s stingier line on Katrina aid and twice opposed an independent commission to investigate the failed government response. Asked on his tour what should happen to the Ninth Ward now, he called for “a conversation” about whether anyone should “rebuild it, tear it down, you know, whatever it is.” Whatever, whenever, never mind.

For all this primary season’s obsession with the single (and declining) demographic of white working-class men in Rust Belt states, America is changing rapidly across all racial, generational and ethnic lines. The Census Bureau announced last week that half the country’s population growth since 2000 is due to Hispanics, another group understandably alienated from the G.O.P.

Anyone who does the math knows that America is on track to become a white-minority nation in three to four decades. Yet if there’s any coherent message to be gleaned from the hypocrisy whipped up by Hurricane Jeremiah, it’s that this nation’s perennially promised candid conversation on race has yet to begin.