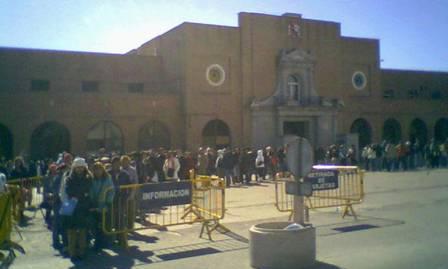 Heaven knows that I have done my share of waiting in long, depressing, and dehumanizing lines, and I have to continue to do so in the future. It is the life of an immigrant.

Regardless of what popular opinion tells us, it looks like legal and illegal immigration are good for the economy and social security. That’s what an editorial in today’s New York Times tell us.

Immigration is good for the financial health of Social Security because more workers mean more tax revenue. Illegal immigration, it turns out, is even better than legal immigration. In the fine print of the 2008 annual report on Social Security, released last week, the program’s trustees noted that growing numbers of “other than legal” workers are expected to bolster the program over the coming decades.

One reason is that many undocumented workers pay taxes during their work lives but don’t collect benefits later. Another is that undocumented workers are entering the United States at ever younger ages and are expected to have more children while they’re here than if they arrived at later ages. The result is a substantial increase in the number of working-age people paying taxes, but a relatively smaller increase in the number of retirees who receive benefits — a double boon to Social Security’s bottom line.

We’re not talking chump change. According to the report, the taxes paid by other-than-legal immigrants will close 15 percent of the system’s projected long-term deficit. That’s equivalent to raising the payroll tax by 0.3 percentage points, starting today.

That is not to suggest that illegal immigration is a legitimate fix to Social Security’s problems. It is another reminder, however, of the nation’s complex relationship with undocumented workers. Would the people who want to deport all undocumented workers be willing to make up the difference and pay the taxes that the undocumented are currently paying?

It is also a reminder of Social Security’s dynamism. As society and the economy evolve, so does the system, responding not only to changes in immigration and fertility, but also in wage growth and other variables. As such, it is adaptable to the 21st century, if only the political will can be found to champion the necessary changes. Those include modest tax increases and moderate benefit cuts that could be phased in over decades — provided the country gets started soon.