Duped by a Dope 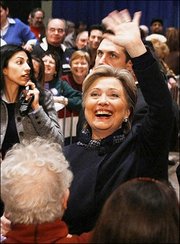 Hillary is often criticized for her absolute inability to ever recognize when she has made a mistake. For example in last week’s CNN debate, Hillary refused to admit to an error in voting for the War in Iraq. According to Hillary, the blame rested solely with Bush’s abuse of the faith she had put in him.

Yesterday on Meet the Press, Mary Matalin had a good line in deciphering Hillary’s Iraq argument. If Hillary and the Democrats think that Bush is a village idiot and yet she argues that she was played by Bush, well, then frankly she was “Duped by a Dope”.

If you’re duped by a dope once, I suppose it is a pardonable offense. But if you gave Bush discretion once with Iraq and he abused that discretion, then why give him discretion again in Iran like Hillary did a few months ago? Where are all those years of experience, Hillary? I would also think that somebody as experienced as her would have dumped Bill years ago.

2 responses to “Duped by a Dope”