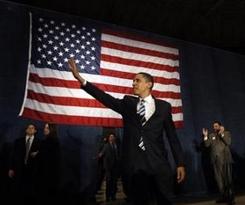 Just two days away from Super Tuesday, it looks like things are going to get very very close. On Saturday, Steven Hill wrote a very interesting piece in the Washington Post about how Super Tuesday and the way the primaries work are actually not working. The way the present system is set up, Hillary is at a definite advantage to Obama.

The past two days, I have run into two former colleagues who both expressed their desire for Hillary to be president (Obama was their second choice). I was shocked, almost as shocked as the man in Thus Spoke Zarathustra when he encounterd the lunatic who had still not heard that God was dead. Doesn’t anyone remember the 90s?

As one of its reasons for endorsing Obama today, the Los Angeles Times the pitfalls of another Clinton:

By contrast, Clinton’s return to the White House that she occupied for eight years as first lady would resurrect some of the triumph and argument of that era. Yes, Bill Clinton’s presidency was a period of growth and opportunity, and Democrats are justly nostalgic for it. But it also was a time of withering political fire, as the former president’s recent comments on the campaign trail reminded the nation. Hillary Clinton’s election also would drag into a third decade the post-Reagan political duel between two families, the Bushes and the Clintons. Obama is correct: It is time to turn the page.

What is interesting is how people really believe the false spin, and the greatest falsity in this election is that somehow Hillary, the candidate with the least amount of years in elected office, has the most experience and is the most prepared.

Could someone please tell me in detail what her experience was? And being first lady is not the answer. If that were the case, I think we should all vote for Laura Bush in 8 years. Her and/or Bill really need to finally be open with the American people and let us know what she did do at the White House and why, at the time, we were not informed of such.

Of course, avoiding a dynasty is not the only reason to vote for Obama, and the L.A. Times eloquently makes that argument:

An Obama presidency would present, as a distinctly American face, a man of African descent, born in the nation’s youngest state, with a childhood spent partly in Asia, among Muslims. No public relations campaign could do more than Obama’s mere presence in the White House to defuse anti-American passion around the world, nor could any political experience surpass Obama’s life story in preparing a president to understand the American character. His candidacy offers Democrats the best hope of leading America into the future, and gives Californians the opportunity to cast their most exciting and consequential ballot in a generation.

In the language of metaphor, Clinton is an essay, solid and reasoned; Obama is a poem, lyric and filled with possibility. Clinton would be a valuable and competent executive, but Obama matches her in substance and adds something that the nation has been missing far too long — a sense of aspiration.