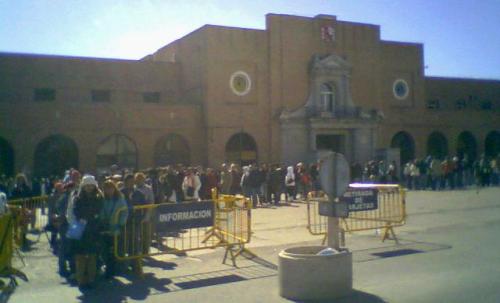 After having successfully surpassed phases one and two of the renewal process for my Spanish Residence and Work Permit, I finally completed the last phase today. The past two weeks have all been in the upper 60ºs F, but yesterday and today the temperatures fell by about 15ºs. This worried me and prepared for the worst — another interminable and unbearable wait in the long lines of the police station in Aluche in the cold. Although it was cold, it was a perfect sunny day, and I hoped this was a positive sign.

I boarded the metro and 50 minutes later, I arrived in Aluche. I then walked about 600 meters to the abandoned hospital that now serves as the police station for immigration. (In Spain, immigration and naturalization fall under the jurisdiction of the police, as opposed to, say, the INS in the U.S.). There were two long lines, one for giving fingerprints and turning in documents, and the other for general inquiries. I ignored both lines and went straight to the gates to speak with the police officer on duty. I asked, “for picking up a renewed permit?” And she said those magic words, “go right in”. That meant, no lines, BABY!

I picked up my brand new Spanish Residence and Work Permit, left the building retracing my steps back to the metro station. Then, feeling very special as if I belonged (and after having calculated that it would take me about two hours to get from Aluche to Alcobendas where I work using public transportation), I felt like the occasion warranted a bit of a celebration. So, I splurged and took a taxi.

Now, I no longer feel like a refugee. I am once again a first class, second class resident! Well, at least for the next two years when I have to start the entire process all over again.