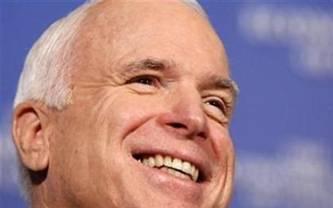 I was just watching yesterday’s post Tim Russert Meet the Press with guests Senators (D-DE) Joe Biden and Lindsey Graham (R-SC), and yesterday I read an excellent piece about Bush’s energy policy by Thomas L. Friedman in the New York Times. Both got me to thinking — and I can’t remember whether it is postive or negative reinforcement — that the Bush Administration and now John McCain want us to reward them for their remarkable ineptitude.

I don’t need to spell it out for you in detail because the facts are pretty clear. We have a war in Iraq that is lasting longer than World War II and John McCain thinks we need to stay the course because the war has benefitted Iran. We need to stay because there are terrorists that we cannot properly fight in Afghanistan because we are overcommitted in Iraq, and we cannot leave because we have installed a democratic government that is pro-Iran.

The war has also helped in the demise of the U.S. economy and has furthered revealed our fossil fuel dependency and vulnerability. While we all suffer $4.00 a gallon gas, Exxon Mobile has earned record profits. Instead of diversifying our energy sources and preparing for the future — that would be bad for the oil companies — Bush and McCain want us to reward oil companies yet again with the contracts. Let’s drill up the American coastline and give the American oil addicted population what it needs — some domestic grown petrol dope. The pushers will profit and the people can eazy ride their way into oblivion.

McCain even appears to have changed his mind on torture, Guantanamo, an independent judicial branch and a political system of checks, balances and separation of powers, calling the Supreme Court’s recent (obvious and foreseeable) decision one of its worst ever. Why would someone who has been tortured in a foreign military prison want to reinforce a legal climate that leaves the door open to similar practices? Even conservative pundit George Will (who I believe to be a closet Obamamaniac) was surprised by McCain’s “Contempt of Courts“, wondering whether McCain thought the Court’s decision ranked as poorly as Dred Scott, Plessy v. Ferguson or Korematsu. Go George! END_OF_DOCUMENT_TOKEN_TO_BE_REPLACED