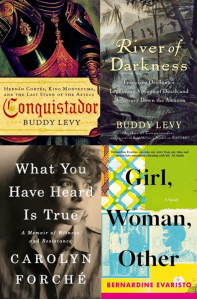 This year I felt like I was way behind in my reading. Maybe this was because of some longer books like The Brothers Karamazov or Embracing Defeat about how the US occupied Japan following WWII. Also some of my reading capacity was cannibalized by the My Brilliant Friend and Casa de Papel TV series. So I was quite surprised when I did the actual count: 29 books which is more than my usual average of 24 book per year.

Here is what I read (in reverse chronological order):

The year had some definite winners and one major disappointment. I was so excited to finally read The Brothers Karamazov yet found it very dated and slow moving. It only became interesting during the last fourth of the story. By far my favorite books this year were the two Buddy Levy histories of the Americas: Conquistador and River of Darkness. I also loved Carolyn Forchés memoir about El Salvador, What You Have Heard is True, and Bernardine Evaristo’s Girl, Woman, Other. Honorable mentions go to Educated, the incredibly moving You Don’t Have to Say You Love Me, and Laila Lalami’s The Other Americans. I am always so impressed how each Lalami novel has a different voice and timber.

Finally as in other years, I always seek refuge in George Pelecano’s novels. This year I read four, including The Big Blowdown which may be along with The Turnaround my favorite to date. I don’t know what I will do when I have finished all of his work.