After giving up podcasts on my commute and spending an entire month listening to nothing other than Beyoncé’s Lemonade (that’s for another post), I decided to go back to my jazz listening days. 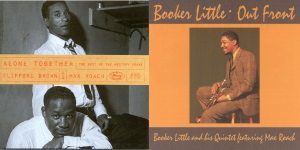 One day on shuffle, my iPod hit two Max Roach pieces back-to-back, the first one with trumpeter Clifford Brown and the second with trumpeter Booker Little. Both Brown and Little were perfect, innovative fits for Roach’s style, yet died tragically young. In fact, Roach — one of the great (if not greatest) Jazz drummers and pioneers– had close musical relationships with many promising Jazz musicians whose lives were tragically lost to substance abuse, car accidents, or disease. From the top of my head I can think of these Roach sidemen and leaders he played with who died young:

Apparently, the sudden deaths of Clifford Brown and Rich Powell in a car accident in 1956 sent Brown in a deep depression that lasted for years. Back in the late 50s and 60s, I doubt anyone talked about depression, let alone PTSD or Survivor’s Guilt. So one can only imagine how Roach must have handled so many of his bandmates dying so young in such a short space of time.

On a happier note, my iPod would also shuffle to some less well-known gems that I had almost forgotten about:

I recommend all of these!

Talking about Jazz, I just finished the Autobiography of Malcolm X as told by Alex Haley. What’s the connection? Besides the fact that like Jazz, Malcolm X was ironically very popular on white college campuses, he also spent a significant part of the 1930s and 40s as a hustler in Harlem, dancing at the Savoy and befriending many of the Jazz legends. While I really enjoyed the first third of the book where you get this amazing historical insight into Harlem life in the 30s and 40s, I found reading about Malcolm X’s entrance into the Nation of Islam and his relationship with Elijah Muhammad much less interesting. Politics aside, this could be due to the fact that I was frustrated to see the hustler getting hustled.

I recently read Claude Brown’s fantastic autobiographical Manchild in the Promise Land which is also about a young black man finding his way coming up in Harlem and which I have to admit I enjoyed more. But when I got to the end of Malcolm X where Malcolm returns from his pilgrimage to Mecca and has definitively broken with the Nation of Islam, you can clearly see what a gifted and charismatic thought-leader he had become. What earns the autobiography the full four stars is the afterword where Haley discusses how the book was written and his relationship with Malcolm. There you get the full sense of the times and Malcolm’s intensity and intellect. But for Malcolm’s talent in action, I can only recommend watching his speeches on youtube.