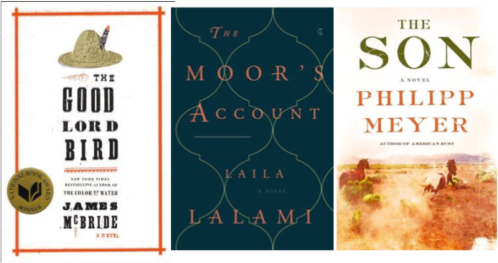 The year 2014 was a good year for reading. I was more prolific than other years, having read (assuming I finish the last two books I am presently reading by December 31st) a total of 24 books:

Of these, two are re-reads: Cien años de soledad and Wind Up Bird Chronicle. The first one I decided to read fifteen years after I had read it first (this time in Spanish) in honor of Mr. Garcia Marquez on his passing. The latter because I was so disappointed by the Colorless Tsukuru Tazaki that I needed a Murakami fix to fill the void.

Most of what I read was pretty good, some definitely better than others. The three that definitely stood out as something special were first The Son by Philipp Meyer and The Good Lord Bird by James McBride. Then Lalami’s The Moor’s Account deserves a special mention, not just because it was a great read, but because it has really inspired me to learn more about American history, and by that I mean the history of the people that were here before me and what happened to them, why, and how that relates to who we are today. And answers to those questions are in fact, in their own various ways, addressed by Meyer and McBrides’ books.