Recent Books and the Horn of Africa

Here is the list of books that I have read since the beginning of the year, with a little bit of commentary on how it became so focused on the Horn of Africa: 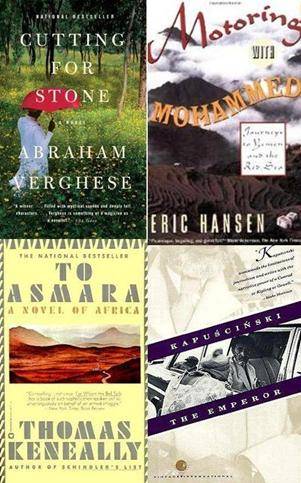 Nowadays when I browse for books, I generally look for different things: recommendations from family and friends, contemporary American authors, foreign authors who write about places and subject matters that I am unfamiliar with or wish to learn more about, what’s new from my favorite writers, and what is available for free on my Kindle. Also when I read a book that I like, I usually get excited about reading something else related to the topic.

My present list of books is a perfect example of this. I started out by reading Gai-Jin as I had absolutely loved James Clavell’s Shögun, both the book when I read it about 10 years ago and the miniseries when I saw it as a child. Interestingly enough, Gai-Jin covered some of the same topics as other recent books that I have very much enjoyed — The Thousand Autumns of Jacob de Zoet and River of Smoke – namely, the European exploitation of East Asia.

I then read Sally Morgan’s My Place which was a gift from my sister-in-law who had just returned from a trip to Australia, followed by two books about Morocco. A Thousand Camels in the Courtyard is a collection of short stories by Bowles, one of my favorite authors, all relating the smoking of kif. I was particularly interested in reading Salvation Army, about growing up homosexual in Morocco (which was very bad, by the way).

Next, I finally got around to reading Cutting Stone, a book repeatedly recommended to me by my mother, and I absolutely loved it. The book takes place in 1950s and 60s Ethiopia, and although I am from Washington, DC with a large Ethiopian population and was a huge Bob Marley and Reggae fan growing up, I knew very little about Ethiopian history. This book inspired me to learn a lot more about Ethiopia and its surroundings. While I have read a dozen books by Nuruddin Farah on Somalia, Verghese inspired me to learn more about the Horn of Africa. Thus, I ordered a few of the books listed in his acknowledgments: Motoring with Mohammad, In Asmara, and The Emperor.

While impatiently waiting for the shipment to arrive, I flew through the Kindle edition of The Reluctant Fundamentalist about a Pakistani student in the U.S. at the time of 911.

Then my package arrived, and I first started off with Motoring with Mohammad, a travel book about Eric Hansen’s adventures in Yemen. I then read In Asmara about the Eritrean revolutionary movement in 1980s (ironically its main character is Australian who discusses some of the same issues as in My Place), and finally, I read The Emperor about Haile Selassie’s last days, a book I don’t think will have pleased many Rastafarians.

And finally after a Horn of Africa overload, I decided to completely change gears. I first read Paul Auster’s pleasant Brooklyn Follies and then decided to go for a classic. So what do I choose, but Lord Jim which ends up being about a shipwreck off the coast of Yemen – which by the way I am now presently struggling to get into.

As it turns out, Lord Jim seems to tie the knot of a long list of books that I have read over the past three years or so that all seem to be related by six degrees of separations. We have the aforementioned books on Ethiopia and Yemen: Cutting for Stone, Motoring with Mohammad, In Asmara, and The Emperor, plus  Nuruddin’s Farah’s Links, Knots, Crossbones on Somalia. And then there was the period I had read: Ibn Battuta’s 14th Century travels across the Muslim world; Arabia Felix about a Danish trek to Yemen (like Motoring with Muhammad, also by a guy named Hansen); The Sultan’s Shadow about Oman’s rule over Zanzibar and the East African Slave Trade (leading into Congo); The Poisonwood Bible about an American missionary in Congo prior to the killing of Patrice Lumumba; King Leopold’s Ghost about the Belgium king’s monstrous human rights abuses in Congo; The Beautiful Things that Heaven Bears about an Ethiopian immigrant living in Adam’s Morgan which includes a Congolese character; and finally, Bob Marley, The Untold Story which includes accounts of Marley’s famous trip to Rhodesia/Zimbabwe.

To make a long story short, I highly recommend Abraham Verghese’s Cutting for Stone. It is a wonderful novel.