David Frum on Guns in America 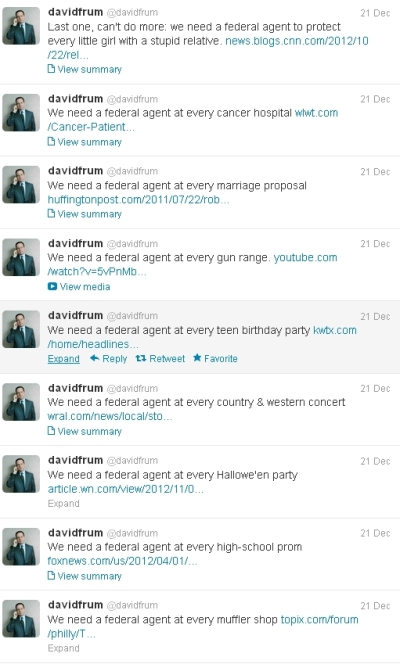 Our national delusion seems to know no limits. Mainly I am talking about the likes of Wayne Pierre and his NRA cronies. But they’re not really the problem are they? The problem is the heads-in-the-sand tribal partisanship where people faced with every piece of evidence stacked against their “team’s” position will actually believe something as ridiculous as “guns don’t kill” or “guns aren’t the problem” or “we need more guns” to protect us all.  Or one side will be vehemently anti-war and pro-due process until their president is in power.

What kills me about this is that there are really smart people out there who buy into the partisan rhetoric and will accept utter nonsense as fact.

Let me give you a perfect example: yesterday while on the phone with a family member to say “Merry Christmas” I happened to express one major barrier to to moving back to the U.S., out of this world health care costs. The response I got was, yeah, but when a European gets really sick they come to the U.S. for treatment. Well, first of all that isn’t true. When a European gets sick, they get good, affordable medical care at home. When a super rich European gets really sick they sometimes go to an American hospital for really expensive treatment. When an American, a normal American who is not really rich (in other words, one who could be me) gets really sick, they die and they die broke. They cannot afford elite American health care. To say we have the best medical care would be like saying that America has the best food in the world because it has the most expensive restaurant in New York City. We do not have the best health care system in the world, and we definitely do not have the best health care results. To say or believe otherwise is completely delusional, and when push comes to shove, the only reason to argue that we do is for purely partisan gain (ie, to root for the home team).

Back to guns: conservative writer, David Frum, has taken particular aim at the pro-gun wing of his party, and has done a very effective job at highlighting the correlation between the prevalence of fire arms in the U.S. and the outrageous number of gun-related deaths, injuries and crime, and how all that guns do is turn normal quarrels into violence clashes.  Following Wayne Pierre’s call for federal agents at schools, Frum tweeted a series of news posts on gun violence in America to very effectively demonstrate the extremity of the gun-apologists’ blindness:

Filed under Essays, We The People