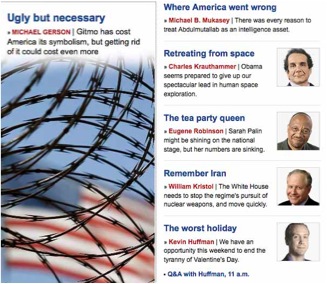 If there were any doubts left whatsoever as to whether a liberal mainstream press actually existed in the United States, the Washington Post’s op-ed page once again proved itself to be overwhelmingly neo-conservative with four out of six articles, including articles by the blood thirsty, macho, war-wongering neocons Krauthammer and Kristol. Then there are the Bushdom nostalgists, Michael Gerson and Michael B. Mukasey, who want us to believe that neither U.S. sovereignty nor the U.S. legal system are strong enough to prosecute and incarcerate terrorists.  Maybe the two should put their articles together and then they’d come to the conclusion that after you fail to afford criminal and even military suspects their rights, then the evidence you have obtained against them is no longer admissible in either civilian or criminal courts. That leaves you with the only option left of operating a prison like Guatanamo, hidden from the Rule of Law, where suspects are held without ever being charged or tried with a crime. Then when Iran holds a trial against a U.S. citizen, Kristol and Krauthammer cry “human rights violation” and plead for a healthy dose of air strikes; what Hillary diplomatically calls obliteration.

Forget the fact that Miranda requires all suspects who are in custody and being interrogated to be read their rights. Forget that Robert Reid was Mirandized and tried in civil court under Bush/Cheney. Forget the fact that the Constitution’s Bill of Rights applies to people, not just citizens (even though Mukasey appears to believe that Miranda does not always apply citizens). Forget that these Constitutional rights — under the First, Fourth, Fifth, Sixth and Eighth Amendments — do not come with “except during wartime” exceptions (or that Congress has not declared war). Forget all of the domestic and foreign terrorists tried and convicted in federal civilian court over the past decade, and forget about the ones that could not be convicted by military tribunals under Bush/Cheney. Forget all your facts and your law. Sarah Palin — a politician to take seriously according to senior Washington Post pundit Broder — says she’s a Constitutionalist and, along with the neocon Post, believes that the Constitution just shouldn’t apply to the law anymore.