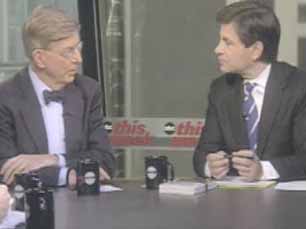 George Will is at it again. After remarking about the obvious absurdity of conservative claims about closing Guantanamo to making the cases for leaving both Iraq and Afghanistan, he has now disagreed with his fellow pundits on the right — including the ever blood thirsty David Brooks — siding with the Department of Justice in favor of trying 911 suspects in New York courts and in favor of the American Justice System.

All of this officially makes George Will one of the only conservative pundits (or any pundit for that matter) who consistently advocates in favor of his core beliefs over simply pushing the party line.

4 responses to “Go George Will (Again)”