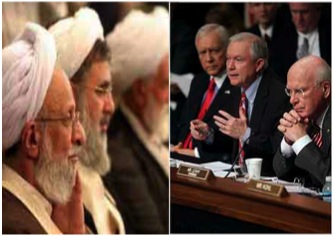 On reflecting upon the recent faux outrage about the faux racism of Judge Sotomayor by a panel of almost identical looking senators (both in dress and physical appearance), these gentlemen are beginning to resemble their Iranian counterparts. While the Mullahs allegedly deny the Holocaust, here we have the scrutiny of a senator from South Carolina, a state that until recently flew the Confederate Flag (which is either racist or unpatriotic) and the indignation of the senator from Alabama, a state that had de facto slavery until the 1940s. Never mind that Sotomayor has in the majority of her judicial decisions ruled against plaintiffs in civil rights cases; that Justice Alito who has admitted that his ethnic background affects his judicial decisions recently ruled in favor of an Italian American in the Ricci case; that to Republican senators judicial impartiality means favoring the status quo only; that the Republican Vice Presidential candidate in the last election ran on the platform that her values and insight as a rural woman made her superior to urban men; or that there has only been two non white justices and only two women on the Supreme Court in its entire history. Sotomayor is the racist and white senators must fear her wrath.

And now because a black Harvard professor, an elitist like Obama himself, may have cried wolf, suddenly rejecting the very existence of racial profiling, like Iranian Holocaust denial, has become the conservative battle axe of the day. Nevertheless, the image of the American Mullahs alone speaks volumes.

7 responses to “The American Mullahs”