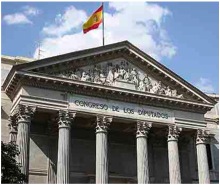 Two aspects of Spain’s democracy have always struck me as being contrary to the very principles of democratic governance: its questionable separation of powers and lack of political accountability.

The first of these is the lack of a clear separation of powers, especially between the executive and legislative branches of government, but also with respect to the powers delegated to the judicial branch. Perhaps this is in part due to the fact that Spain is a constitutional monarchy wherein the King is the ultimate head of state. Nevertheless, the basic functions of the executive branch, as assumed by the president and his ministries, are in practice inseparable from the majority rule of the legislature.

When the president takes office and assumes power, his cabinet members and ministers generally serve in the legislature as well. For example, Carme Chacón is both the Minister of Defense and a representative in congress. This same lack of a Chinese wall standing between the executive and legislative branches is also replicated at the regional level (i.e., Esperanza Aguirre, the president of the Madrid autonomous region is also a representative in Madrid’s legislature).

The immediate result is that the voice of the presidency and the legislature’s majority is one and the same, united and indivisible. Any disputes that could possibly arise within the ruling party are always settled in private; thus leading to a total lack of transparency or public inter-party debate. This inevitably leads to the alienation of local interests at the national level. There are two principle reasons for this: public differences on policies are strictly prohibited by the party, even though it is only logical that constituents from different regions will likely have differing political interests on any given matter (what’s good for one locality may not be good for another), and, as I will explain further below, the representatives are accountable to their party alone and not to their supposed constituents.

So while for practical purposes the governing executive is the governing legislature, the congress itself serves the limited role of a mere forum for the governing party to present and defends its agenda, and for the other parties to raise objections. But little more. In other words, both the legislative and executive functions are controlled by a fixed list of individuals all jointly elected under a single vote on the ballot. All for one, one for all, regardless of the fact that, in theory, each member on the list owes an alliance to a different set of constituents.

Meanwhile, the third branch of government, the judiciary, also has a confused role in the equation. If the legislature makes the law, the executive branch executes and enforces the law, then the judiciary should interpret the law. That’s not the case here where Spain maintains the traditional pre-democratic continental judicial figure known as the instructive judge (juez de instrucción). These judges have the power to, ex officio, bring criminal charges, investigate crimes, gather evidence, hold suspects in custody, and assume other similar activities that clearly overlap with the functions of prosecutors. Of course, the same instructive judges who act in this prosecutorial role are not the same judges who later preside over the case at trial. Nevertheless, the fact that one judge may, for example, issue a search warrant requested by a judicial colleague raises serious concerns about conflicts of interest, for the judiciary cannot be expected to serve as a check against its own power.

Furthermore, judicial independence does not necessitate, as many Spanish people misinterpret, that politicians should be barred from criticizing the decisions of judicial officials, but rather judicial independence requires that judges should not assume political roles. The decision to prosecute is always political. And when the two branches, judicial and executive, are both investigating and prosecuting crimes simultaneously the judicial branch inevitably allows itself to become politicized. In part, due to these overlapping powers, the former Minister of Justice, Mariano Bermejo, had to resign when it was learned that he had been socializing (no pun intended) with Spain’s most proactive instructive judge, Baltasar Garzon.

Remember, the rationale behind an unelected judiciary is that in order to interpret the law without prejudice, judges must not be pressured by the will of the majority to the detriment of the minority. That independence is compromised once the same collective is allowed to act as police, prosecutor, judge and jury. This is why the prosecutorial powers, unchecked by the electoral process or by any other branch of government, that Garzon flaunts is so disturbing.

This causes a series of side effects: the elected official is not accountable to the voter, voters are disenfranchised from and do not have a stake in their government, and as a consequence, I would argue, this leads to national disunity.

Think of it this way: at the national level, you vote for a president to represent your national interests, a senator to represent your regional interests, and a member of the lower chamber of congress to represent your local interests. Imagine now that when you reach the voting booth, you look down at the ballot, but you can only check one box to represent all three of these differing interests. Ironically, you’ll have to pay for the salary of everyone on the list, but they all act with a single entity. They mind as well save the taxpayers money and have only a handful of members of congress, one for each party, and give each member a weighted vote corresponding to their party’s performance at the ballot box.

As a result of this system, most Spaniards do one of two things. They either vote for a regional party or they vote for a national party. The problem with voting for a regional party is that it does not govern and plays a very limited role. The problem with voting for a national party is that you have no way of determining whether your representative has defended your local interests when those interests conflict with other members of the party.

Imagine for a moment that there were no lists, but rather there was actually a choice and you could vote for each of your three different representatives individually. People could potentially vote, for example, for a presidential candidate of one party and a senator of another, etc. This would especially give voters in the traditionally regional nationalist regions (País Vasco, Cataluña, Galicia) a stake in the outcome of the national elections as whole. These regions would be put into play on the national scene as the national parties, who generally ignore these areas, would be forced to take notice. At the end of their mandates, incumbents would have to defend their voting records as in the best interests of their local constituents and to debate their direct contenders. Does this happen now? Of course not.

As things stand, though, elections are exclusively about the executives (president, regional presidents, and mayors), and most voters have absolutely no clue as to who appears on the lists and who will represent them in the legislature. Let me give you a few examples of this. The other day I was walking in a park in one of the wealthier suburbs in Madrid when I saw a woman in her thirties who looked familiar. When I asked who she was, I was told that she was probably a member of congress. I did a little research and found out that she had been handpicked by a relative, also a politician, to be on the list for the Partido Popular. This all suddenly felt very disturbing to me. Not because she had limited experience, her father was a noteworthy politician (heaven knows that sounds like George W. Bush or Al Gore), or she was living in a nice neighborhood on the taxpayers’ bill, but because she became a member of congress without anyone ever debating her credentials or even noticing for that matter.

This is one of the most offensive aspects of Spain’s system. All of these “representatives” are elected without ever being vetting, without anyone ever discussing the merits of their candidacies. Just imagine that in Spain, the Minister of Development (Ministro de Fomento) who is also the vice-secretary of the PSOE party and an acting congressman does not have a high school degree. The former Minister of Industry, Jose Montilla did not have a college degree, and the present Minister of Equality, Bibiana Aído, is the 33 year old goddaughter of one of the ruling party’s most senior members. I am not pointing this out because I believe that experience or education necessarily determine one’s qualifications for office, but because these individuals have all assumed extremely powerful political positions without ever having to hold their own in an election or defend their candidacy. Such is the total disregard for the electorate that the vice-president (there are actually a few vice presidents) is named after the election and the president can change the vice-president at will throughout his mandate.

When you look at it all, it’s no wonder that someone like Mariano Rajoy, the leader of the Partido Popular opposition party can continuously run for president even though he has never won an election before in his entire political career. In a tradition where elected officials have never been directly elected and there are no primaries, nepotism and closed-door amiguisimo alone determine a candidacy. So what are we left with? A ruling party filled with unqualified ministers and unvetted public officials and an opposition party incessantly presenting the same perennial loser. And all of this without even touching on how the European Union’s elected officials are even more unrepresentative.

As a final note, let me say that I am not trying to demonize Spain. I ain’t no hater or a basher. Rather, I consider Spain, like the United States, my home, and I believe that, instead of constantly criticizing countries and cultures that in all honestly we don’t know the first thing about, we should work on identifying and addressing the shortcomings in our own neck of the woods. At least this is how I rationalize dedicating so much time and space in Grave Error to addressing the abuses of the former administration, but is also why I have to start being tougher on the present one.