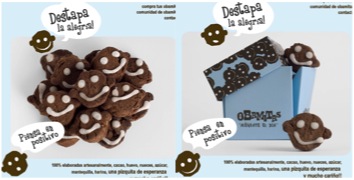 I have already written about the innocent/ignorant brand of racism in Spain. Nevertheless, it continues to surprise me that people in Spain still haven’t gotten the message. For example, the depiction of black people as caricatures in blackface (this is commonly done in Spain with products from Cuba or Africa), directly alluding to the extremely racist minstrel shows, is beyond all measures of offensive conduct.

Nevertheless, a Spanish company with all the best intentions of praising Barack Obama can go ahead and market a blackfaced, ultra-racist cookie (called Obamitas) without anyone in the country blinking an eye. When will the new century begin?