When the Shoe is on the Other Territory 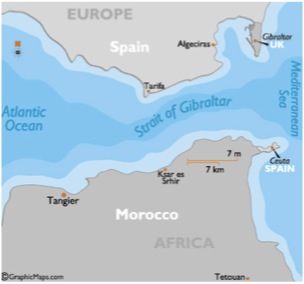 In 2007, the Spanish King and Queen traveled for the first time during their entire reign to the Spanish enclaves of Ceuta and Melilla, located in Morocco. When Morocco officially expressed its discomfort with the visit, temporarily suspending diplomatic relations with Spain, the Spanish government and press fully and unapologetically defended the trip.

The Spanish press pulled out every argument in the book: Ceuta and Melilla were Spanish prior to the establishment of the modern Moroccan state and before the Alouite reign, were there a referendum in the two cities the citizens would overwhelming vote in favor of Spanish rule, etc. The government argued that as the cities were Spanish territories the royal family had every right and the obligation to visit their land and subjects; thus totally ignoring local sensitivities, as these lands have been regularly contested, sometimes violently, since the 15th Century. In yet another classic example of the Zapatero government’s verbal ineptitude (see the most recent), Spanish foreign minister Moratinos, against his government’s fundamental argument, repeatedly referred to King Juan Carlos’ trip to Morocco, not Spain.

Flash forward to today, and the shoe is on the other foot. This time it is Gibraltar and a member of the British royal family has traveled to that British rock in Spain. And guess who’s crying now? That’s right, the Spanish government has expressed its official discomfort with the visit, claiming that it was both unfortunate and offensive to the sensitivities of Spaniards. Sound familiar?

13 responses to “When the Shoe is on the Other Territory”