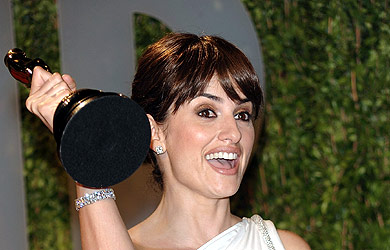 Penelope Cruz’s Oscar award this year for Best Supporting Actress, therefore, should not have surprised me either. Yet instead of reinforcing mediocrity the Academy rewarded her total lack of credibility. Penelope Cruz’s performance in Vicky Cristina Barcelona was little more than  bilingual yelling. As a matter of fact, both her and Javier Bardem’s characters were two of the least plausible character portrayals I can recall. The fact of the matter is that after almost nine years of living in Spain and 20 years of traveling to Spain, neither character even remotely resembled any Spanish person I have ever dealt with. And Woody Allen deserves most of the blame.

Woody must have decided he wanted to film a movie in Spain, and because he knew nothing about Spanish culture, he scripted two Spanish characters based on stereotypical European behavior — stereotypes maybe for the French or Italians, but definitely not apt for Spaniards. Bardem’s character, who in the opening scene proposes a threesome to two American women in English, was probably the least likely Spaniard on the face of the planet. And say what you will about Spanish women, but hysterical swearers, a la Penelope’s character, they are not.  As I said, it felt more like Penelope and Javier were playing the French or Italians.

The one thing that I did like about how their characters were scripted was that they would immediately switch to Spanish, their native language, when talking among themselves, and how Javier would repeatedly remind Penelope to speak in English. But this isn’t particular to Spanish. The French, Italians, and even Americans would do the same thing. Heck, it is very hard to speak in a foreign language to someone who speaks your native language. Unfortunately, though, Javier and Penelope’s conversations in Spanish also sounded contrived. They would simply jump into a forced tirade of contrived Spanish slang and insults, making their characters even more phony. If screaming lots of joder and coño is acting, then give the Oscar to Luis Aragones.

Another unbelievably non-credible moment of the film was when Bardem’s character’s father has an Almodovar moment, saying that he has daily sex dreams about his son’s ex-wife. I know that the father is supposed to be eccentric, but that is simply not a Spanish father. Nice try, though, Woody. And perhaps worst of all was that we were supposed to believe that Rebecca Hall’s character had moved to Barcelona to write her master’s thesis on Catalonian identity when she doesn’t even speak Spanish (let alone Catalan) and has never heard of the city Oviedo? Por favor!

I will say, though, that the best performance was actually by Scarlett Johansson. She was so annoying, just like her character was supposed to be. So isn’t it interesting that the Oscar goes to Penelope Cruz for interpreting a Spaniard based on the stereotypes that Woody Allen has of other European women? Ironically, she was not believable in Spanish so in order to be believable in English, you’d have to assume that Spaniards are just like stereotypical French or Italians.

Nonetheless, the Oscar does finally vindicate Penelope at home in Spain. In an amazing example of double standards, Penelope’s move to Hollywood, coinciding with my move to Spain nine years ago, has not always been seen positively by the Spanish media and public. Rather Penelope has often been characterized as an opportunist and even a bit of a tramp. With Tom Cruise, she was made out as a home wrecker while the relationship was considered one of pure convenience. Nevertheless, Antonio Banderas’ own home wrecking (both his and Don Johnson’s) has never been put into question. Banderas is loved in Spain, and no one seems to care that he totally sold out by playing mainly the Latin Lover (always as an Hispanic and never a Spaniard) or appearing in silly children’s films. On the other hand, Penelope has worked exclusively with top directs and actors, even if most of her films have been flops. And after all of that abuse, she will now be treated as a national hero because the Academy misinterpreted her barely credible role based on Woody’s stereotypes of the wrong country.