Why GOP Governors Need the Stimulus 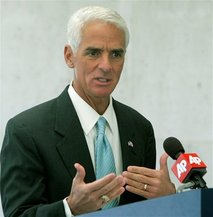 The Bush tax cuts were nothing more than a delayed tax hike. For the last eight years, we increased public spending – especially on warfare – while decreasing tax revenues from both individual and corporate taxpayers. The way we paid for the tax cuts in the short term was to simply borrow that money abroad. Isn’t it ironic then that one of the arguments against the stimulus package by the House Republicans is that it would indebt a whole future generation of Americans. Well, Bush then already did that, didn’t he?

It is no surprise that Republican state governors see things differently from their fellow party members in Congress. With a sharp decrease in tax revenues and fees (that’s one of the tricks, decrease taxes but increase fees for licenses, etc), the states are feeling the pain and are on the verge of bankruptcy. Furthermore, states don’t have the same credit rating as the federal government and cannot turn to the Chinese as the borrower of last resort. Without money from a stimulus package (of some sort), the states cannot fund basic services like public schools, roads, sanitation, etc, and tax cuts certainly aren’t going to cover these costs, no matter what stubborn ideology you may adhere to.