This Week with Paul Krugman 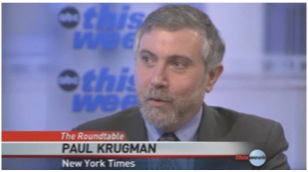 I particularly enjoyed watching the round table discussion on this Sunday’s This Week with George Stephanopoulos between the host, Cokie Roberts, George Will, Sam Donaldson, Carly Fiorina and Paul Krugman. It was truly great to witness how each of the other panelists would confidently spew out their pre-fab political talking points and punditry on the economic crisis and then Krugman, the recent Nobel Prize winning economist, without any pretension would feel obliged to correct them as if they were school children. By the end of the show, you could see how they were all almost too afraid to comment for fear of discrediting themselves. It just goes to show that political ideology is trumped by objectivity every time.

I do have to give George Will credit for steering clear of falling into the trap a second time. Will, who invited Obama last week to his house for dinner along with other leading conservative pundits in a show of good faith, had the best lines on why Caroline Kennedy had not gotten the New York senate seat:

First, the country just said goodbye to George W. Bush, the inarticulate child of a famous father; they didn’t want another one. Second, Barack Obama has in a sense raised the bar. Whatever you think of him and his policies, he is conspicuously educated and articulate. Third, her candidacy came right in the middle of the Blagojevich storm. Fourth, there’s a sense of entitlement abroad in the land, that is automobile companies feel entitled, financial services executives getting bailed out feel entitled to bonuses and all the rest, and the country is rebelling against that. And finally, the baby boomers are the only people obsessed with the Kennedy’s. I mean, most living Americans have almost no knowledge of Jack or Robert Kennedy.

5 responses to “This Week with Paul Krugman”