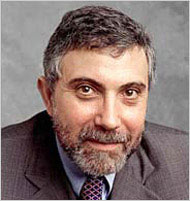 A few months ago during the presidential election, I criticized John McCain’s call to fire SEC chairman Cox; I didn’t think that it gave the right signal. Nevertheless, now after the Madoff scandal where it appears that the SEC failed to act, someone at the Commission must pay the political price and that person should be its chairman.

What I find so interesting about the financial crisis is how “professionals” who are rewarded for generating so much wealth on Wall Street have in reality destroyed so much of the economy elsewhere. In an excellent article in the New York Times, recent Nobel Prize winning economist Paul Krugman writes,

The financial services industry has claimed an ever-growing share of the nation’s income over the past generation, making the people who run the industry incredibly rich. Yet, at this point, it looks as if much of the industry has been destroying value, not creating it. And it’s not just a matter of money: the vast riches achieved by those who managed other people’s money have had a corrupting effect on our society as a whole.

Let’s start with those paychecks. Last year, the average salary of employees in “securities, commodity contracts, and investments” was more than four times the average salary in the rest of the economy. Earning a million dollars was nothing special, and even incomes of $20 million or more were fairly common. The incomes of the richest Americans have exploded over the past generation, even as wages of ordinary workers have stagnated; high pay on Wall Street was a major cause of that divergence.

But surely those financial superstars must have been earning their millions, right? No, not necessarily. The pay system on Wall Street lavishly rewards the appearance of profit, even if that appearance later turns out to have been an illusion.

Meanwhile, as I have mentioned previously, we have a double standard when it comes to the auto industry with its blue collar workers and the suits in Wall Street. The former is highly educated and qualified, and the latter is antiquated and pre-disposed to fail due to its own decadence and mismanagement. Haven’t both industries both failed? One of the biggest problems is how we reward people and then celebrate those people for having rewarded them, regardless of whether or they actually no what they are doing. As Krugman puts it,

there’s an innate tendency on the part of even the elite to idolize men who are making a lot of money, and assume that they know what they’re doing.

And as I have witnessed too often, the idolized tend to be the least capable, the least knowledgeable and yet the most free to express their unqualified opinions. Welcome to Ortega y Gasset’s Revolt of the Masses.