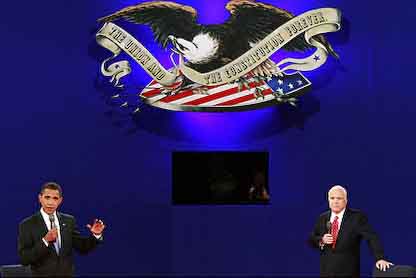 During last night’s debate, moderator Tom Brokaw asked the two candidates who they would choose to replace Treasury Secretary Paulson when he steps down at the end of the Bush presidency. Both McCain and Obama fell for the trap and mentioned Warren Buffet as a possible candidate. You would expect this answer from McCain with his one-man solutions and hero-adoration. As I have made clear before, we cannot depend on a single hero to solve the nation’s problems:

. . . Individual people cannot be the saviors of our public welfare and cannot be the scapegoats either, no matter what John McCain may think. Were you to listen to how he passionately talks about General Petraeus with reference to Iraq, you’d think that Petraeus was more powerful than the entire military and the only person in the country able to “lead us to victory.” And if you heard McCain’s words yesterday, you’d think that by firing the head of the S.E.C., the financial woes of the country would magically dissipate and erase eight years of deregulation and minimum oversight.

That’s simply not what makes a democracy strong. Democracies need solid, independent institutions — institutions that are more durable than the people who run them. The entire U.S. military endeavor in Iraq has to be based on more than what’s in one general’s mind. Otherwise if that general dies (or quits), then what are we left with? The entire financial health of the nation cannot be on one person’s shoulders either . . .

Furthermore, Obama missed a golden opportunity to say that by swapping Treasury secretaries or firing the SEC chairman without reforming the system, we would only be sweeping the problem under the rug. He also should have said, “There are many qualified and willing people to choose from, but let me make this clear: we don’t need a hero, but a government that works for the American people.”

Finally, McCain continued his Golpista military view of American policy. He once again reinforced his vision of American foreign policy being dictated by military personnel and centered on what one general has to say. For McCain it is all about the warrior hero,

General Petraeus has just taken over a position of responsibility, where he has the command and will really set the tone for the strategy and tactics that are used . . .  And I’ve had conversations with him. It is the same overall strategy . . . So I have confidence that General Petraeus, working with the Pakistanis, working with the Afghans, doing the same job that he did in Iraq, will again.

I am sure it is no surprise that during Vietnam the Maverick from the military establishment had little respect for civilian government, saying that he “thought our civilian commanders were complete idiots who didn’t have the least notion of what it took to win the war.” No wonder he prefers foreign policy to be conducted by our military and not by our democracy.