The Case Against Hillary 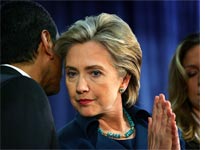 I will try to give this whole topic a nice, long breather for a while, but please indulge this addtional post on why I am in favor of Obama and against what I see as the tiresome legacy of Hillary and the Clintons, as if they were a once fashionable but now long-outdated 50’s pop group.

The farce of the Hillary New Hampshire comeback is something that I still can’t quite understand. How someone who has been in the lead for months, has 35 years of both real and derivative experience, has former president Bill Clinton campaigning for her, and has the most sophisticated campaign team in the world can only pull off a two point win in pale white New Hampshire is astonishing. It is much more of a shocking loss than a comeback victory.

There are even some conspiracy theorists out there who believe that the final New Hampshire results were related to computer error or to voter fraud. I won’t go there, but I will say that Hillary and Bill are besides themselves that a neophyte like Obama would even think of posing an obstacle Hillary’s presidency. It is even claimed that Bill is “furious, outraged, angry and utterly dismissive of Obama” for challenging Hillary’s entitlement.

So to give it a little rest (I know ReWrite is growing bored with the elections), here is Christopher Hitchens’ “Case Against Hillary” (thanks, William):

The Case Against Hillary Clinton
Why on earth would we choose to put the Clinton family drama at the center of our politics again?
By Christopher Hitchens
Posted Monday, Jan. 14, 2008, at 12:15 PM ET

Seeing the name Hillary in a headline last week—a headline about a life that had involved real achievement—I felt a mouse stirring in the attic of my memory. Eventually, I was able to recall how the two Hillarys had once been mentionable in the same breath. On a first-lady goodwill tour of Asia in April 1995—the kind of banal trip that she now claims as part of her foreign-policy “experience”—Mrs. Clinton had been in Nepal and been briefly introduced to the late Sir Edmund Hillary, conqueror of Mount Everest. Ever ready to milk the moment, she announced that her mother had actually named her for this famous and intrepid explorer. The claim “worked” well enough to be repeated at other stops and even showed up in Bill Clinton’s memoirs almost a decade later, as one more instance of the gutsy tradition that undergirds the junior senator from New York.Sen. Clinton was born in 1947, and Sir Edmund Hillary and his partner Tenzing Norgay did not ascend Mount Everest until 1953, so the story was self-evidently untrue and eventually yielded to fact-checking. Indeed, a spokeswoman for Sen. Clinton named Jennifer Hanley phrased it like this in a statement in October 2006, conceding that the tale was untrue but nonetheless charming: “It was a sweet family story her mother shared to inspire greatness in her daughter, to great results I might add.”

Perfect. It worked, in other words, having been coined long after Sir Edmund became a bankable celebrity, but now its usefulness is exhausted and its untruth can safely be blamed on Mummy. Yet isn’t it all—all of it, every single episode and detail of the Clinton saga—exactly like that? And isn’t some of it a little bit more serious? For Sen. Clinton, something is true if it validates the myth of her striving and her “greatness” (her overweening ambition in other words) and only ceases to be true when it no longer serves that limitless purpose. And we are all supposed to applaud the skill and the bare-faced bravado with which this is done. In the New Hampshire primary in 1992, she knowingly lied about her husband’s uncontainable sex life and put him eternally in her debt. This is now thought of, and referred to in print, purely as a smart move on her part. In the Iowa caucuses of 2008, he returns the favor by telling a huge lie about his own record on the war in Iraq, falsely asserting that he was opposed to the intervention from the very start. This is thought of, and referred to in print, as purely a tactical mistake on his part: trying too hard to help the spouse. The happy couple has now united on an equally mendacious account of what they thought about Iraq and when they thought it. What would it take to break this cheap little spell and make us wake up and inquire what on earth we are doing when we make the Clinton family drama—yet again—a central part of our own politics?

What do you have to forget or overlook in order to desire that this dysfunctional clan once more occupies the White House and is again in a position to rent the Lincoln Bedroom to campaign donors and to employ the Oval Office as a massage parlor? You have to be able to forget, first, what happened to those who complained, or who told the truth, last time. It’s often said, by people trying to show how grown-up and unshocked they are, that all Clinton did to get himself impeached was lie about sex. That’s not really true. What he actually lied about, in the perjury that also got him disbarred, was the women. And what this involved was a steady campaign of defamation, backed up by private dicks (you should excuse the expression) and salaried government employees, against women who I believe were telling the truth. In my opinion, Gennifer Flowers was telling the truth; so was Monica Lewinsky, and so was Kathleen Willey, and so, lest we forget, was Juanita Broaddrick, the woman who says she was raped by Bill Clinton. (For the full background on this, see the chapter “Is There a Rapist in the Oval Office?” in the paperback version of my book No One Left To Lie To. This essay, I may modestly say, has never been challenged by anybody in the fabled Clinton “rapid response” team.) Yet one constantly reads that both Clintons, including the female who helped intensify the slanders against her mistreated sisters, are excellent on women’s “issues.”

One also hears a great deal about how this awful joint tenure of the executive mansion was a good thing in that it conferred “experience” on the despised and much-deceived wife. Well, the main “experience” involved the comprehensive fouling-up of the nation’s health-care arrangements, so as to make them considerably worse than they had been before and to create an opening for the worst-of-all-worlds option of the so-called HMO, combining as it did the maximum of capitalist gouging with the maximum of socialistic bureaucracy. This abysmal outcome, forgiven for no reason that I can perceive, was the individual responsibility of the woman who now seems to think it entitles her to the presidency. But there was another “experience,” this time a collaborative one, that is even more significant.

During the Senate debate on the intervention in Iraq, Sen. Clinton made considerable use of her background and “experience” to argue that, yes, Saddam Hussein was indeed a threat. She did not argue so much from the position adopted by the Bush administration as she emphasized the stand taken, by both her husband and Al Gore, when they were in office, to the effect that another and final confrontation with the Baathist regime was more or less inevitable. Now, it does not especially matter whether you agree or agreed with her about this (as I, for once, do and did). What does matter is that she has since altered her position and attempted, with her husband’s help, to make people forget that she ever held it. And this, on a grave matter of national honor and security, merely to influence her short-term standing in the Iowa caucuses. Surely that on its own should be sufficient to disqualify her from consideration? Indifferent to truth, willing to use police-state tactics and vulgar libels against inconvenient witnesses, hopeless on health care, and flippant and fast and loose with national security: The case against Hillary Clinton for president is open-and-shut. Of course, against all these considerations you might prefer the newly fashionable and more media-weighty notion that if you don’t show her enough appreciation, and after all she’s done for us, she may cry.

Christopher Hitchens is a columnist for Vanity Fair and the author of God Is Not Great: How Religion Poisons Everything.

Now, I am not part of the famous “Right Wing Conspiracy” that the Clinton’s use as a flatout defense to any critique. Remember, it wasn’t the horrendous W. Administration that polarized America and Americans, it was the Clinton Administration (that regardless of its positive aspects) bred incredible hatred from the extreme right wing of the Republican party, something that we’ve all been paying for for the last 7 years.

Ironically, the Clintons have recently tried to paint Obama as unelectable because of the potential scrutiny he may he may undergo for his past for having done drugs (something that didn’t impede either Bill or W. from being elected). Obama already addressed these issues in a much more sincere way than did his Democrat predecessor — Obama had inhaled because that was the point. Isn’t that the great difference between the Clintons and a fresh change? Or does it depend on how you define “isn’t”?

One response to “The Case Against Hillary”