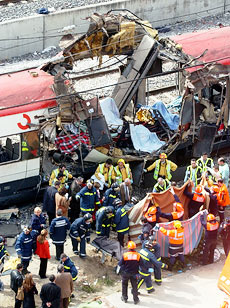 Last week, a Spanish penal court finally gave its verdict in the “Mass Trial” of 28 criminal defendants accused of partaking, in greater or lesser part, in the March 11, 2004 train bombings in Madrid, Spain. The outcome of the verdict was that 22 of the 28 were found guilty.

Now, I am no criminal law or criminal procedure expert, but tyring 28 people in the same single criminal proceeding seems very unjust to me. Mass trials are not unheard of, as was the case with the Camden 28, but if I were a lawyer for any one of the 28 defendants, I would have certainly asked for a seperate trial. And if I were the judge in the case, I would certainly have made it very clear to the public that the trial was not about what happened on March 11, 2007, but about whether each defendant had committed the crimes they had been charged with.

The problem is that both the press and the penal court have held this trial out to be some sort of truth-seeking commission to finally discover who had masterminded the bombings. Once again, this is not what justice is about. For example, one of the findings of fact of the court was that the homegrown terrorist group ETA was not involved, but no one from ETA was standing trial. Why is there a conclusion that has nothing to do with the guilt or innocence of any of those defendants standing trial?

A criminal trial does not ask what the big picture is or what the truth was. An M11 trial should not have been about what happened, but about whether the defendants had committed those crimes which they were charged for having committed.

Yes, sir, that is what a criminal trial is all about. The police investigate a specific crime and gather evidence. They present that evidence to the prosecutors who decide whether there is sufficient evidence to go to trial. At the trial, the prosecutors present the evidence, but the accused/defendant is still presumed innocent. The prosecutor is not trying prove anything other than the fact that the defendant had committed those acts which the defendant is being charged with. NOTHING MORE.

Once the judge (or the jury as is the case in the U.S.) has seen all of the evidence, we are ready for a verdict. Did the defendant commit the act? Yes or no.

So when the Spanish court was unable to say who masterminded and who ordered the bombings, why is anyone surprised? There was only one person on trial specifically charged with being the “mastermind”, and he was found innocent. The rest of the 27 defendants were co-conspirators of varying degress or charged with belonging to a terrorist organization.

Why they were all squeezed into the same courtroom and then the entire press thought that this trial of 28 patsies would determine the truth about crimes that practically none of them were being charged with, I personally have no idea.