The Politics of Blind Hatred 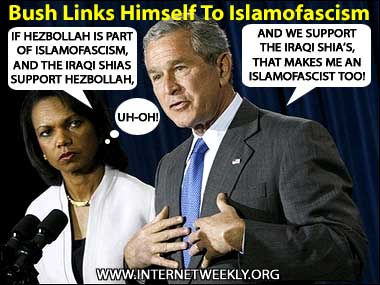 I just read this interesting article by Paul Craig Roberts, a former Assistant Secretary of the Treasury in the Reagan administration, about the inherent falsehoods of Islamofascism. Definitely worthwhile reading.

The Politics of Blind Hatred
Who Are the Fanatics?
September 5, 2007
By PAUL CRAIG ROBERTS

President Jimmy Carter was demonized for pointing out in his book, Palestine: Peace Not Apartheid, that there are actually two sides to the Israeli-Palestinian issue. Distinguished American scholars, such as John Mearsheimer and Stephen Walt have suffered the same fate for documenting the excessive influence the Israel Lobby has on US foreign policy.

Americans would be astonished at the criticisms in the Israeli press of the Israeli government’s policies toward the Palestinians and Arabs generally. In Israel facts are still part of the discussion. If the Israeli newspaper, Haaretz, could replace Fox “News,” CNN, New York Times and Washington Post, Americans would know the truth about US and Israeli policies in the MIddle East and their likely consequences.

On September 1, Haaretz reported that Rabbi Eric Yoffie, the president of the Union for Reform Judaism, which represents 900 Congregations and 1.5 million Jews, “accused American media, politicians and religious groups of demonizing Islam” and turning Muslims into “satanic figures.”

Rabbi Yoffie is certainly correct. In America there is only one side to the issue. An entire industry has been created that is devoted to demonizing Islam. Books abound that misrepresent Islam as the greatest possible threat to Western Civilization and seek to instill fear and hatred of Muslims in Americans. For example, Norman Podhoretz proclaims “World War IV: The Long Struggle Against Islamofascism.” Daniel Pipes shrieks that “Militant Islam Reaches America.” Lee Harris warns of “The Suicide of Reason: Radical Islam’s Threat to the West.”

Think tanks have well-funded Middle East programs, the purpose of which is to spread Islamophobia. Fear and loathing pour out of the Middle East Forum and the American Enterprise Institute.

In the US it is acceptable, even obligatory in many circles, to hate Muslims and to support violence against them. Pipes has been described as a “leading anti-Muslim hate propagandist.” He is on record advocating the use of violence alone as the solution to the Muslim problem. This won him the endorsement of the Christian Coalition, AIPAC, and the Zionist Organization of America for appointment to the board of the United States Institute of Peace.

President George Bush used a recess appointment to appoint this man of violence to the Institute of Peace.

Pipes advocates that the Muslims be beaten into submission by force, the view that has guided the Bush administration. To brainwashed and propagandized Americans, Pipes appointment made perfect sense.

Podhoretz believes that Islam has no right to exist, because it is opposed to Israeli territorial expansion, and that America must deracinate Islam, which means to tear Islam up by the roots.

While neoconservatives, Christian Zionists, and the Bush administration embrace unbridled violence against Muslims, Lee Harris warns that America is much too tolerant and reasonable to be able to defend itself against Muslim fanaticism. America’s “governing philosophy based on reason, tolerance, consensus and deliberation cannot defend itself against a [Muslim] strategy of ruthless violence.”

Islamophobia overflows with such absurdities and contradictions.

Harris tells us that the Enlightenment overcame fanatical thinking in the West, leaving the West unfamiliar with fanaticism and helpless to confront it. Harris, who fancies himself an authority on fanaticism, is deaf, dumb, and blind to Communism and National Socialism and is completely ignorant of the fact that neoconservative fanatics are the direct heirs of the Jacobins of the French Revolution, itself a fanatical product of the Enlightenment.

If Americans did rely on reason, tolerance and deliberation, they might free their minds of shrill propaganda long enough to consider the “Muslim threat.” Muslims are disunited. Their disunity makes them a threat to one another, not to the West.

In Iraq most of the fighting and violence is between Sunni and Shi’ite Arabs and between Sunnis and Kurds. If Iraqis were unified, most of the violence, instead of a small part of it, would be directed against the American troops, and the remnants of a US defeated army would have been withdrawn by now. However much Iraqis might hate the American invader and occupier, they do not hate him enough to unite and to drive him out. They had rather kill one another.

Iran, the current focus of demonization, is not Arab. Iranians are the ancient race of Persians. Indeed, Iran would do itself a favor if it changed its name back to Persia. For eight years (1980-1988) the Iranians and Iraqis were locked in catastrophic war with horrendous casualties on both sides. Despite its military exhaustion, Iraq was considered a “threat” by the American Superpower and was bombed and embargoed for the decade of the 1990s, one consequence of which was 500,000 deaths of Iraqi children.

Not content with the complete crippling of Iraq by the Clinton administration, the Bush administration invaded Iraq in 2003 and has been dealing more death and destruction to Iraq ever since.

Palestine has been under Israeli occupation for decades. Israel has simply stolen most of Palestine, and the remaining Palestinian enclaves are ghettos policed by the Israeli army.

The rulers of Saudi Arabia and the oil emirates are Sunni Arabs. They are more afraid of Shi’ite Arabs than of Israelis. Egypt, Jordan, and Pakistan are ruled by bought-and-paid-for American puppets. The Turkish military is also in the American pocket and suppresses any Islamist influence in the civilian government. Afghanistan is a disunited country of tribal peoples, each holding sway in their area. The Taliban were attempting to unify Afghanistan, and the Bush administration’s fear that the Taliban might succeed was the reason for the US invasion of Afghanistan. The US allied with the defeated Northern Alliance, in part a remnant of the old Soviet puppet government, and turned Afghanistan back over to warlords.

When the facts are considered–Muslim disunity and the absence of modern technology, navies, and strategic reach–the Bush/Cheney/neoconservative/Zionist propaganda that “we must fight them over there before they come over here” is such a transparent hoax that it is astounding that so many Americans have fallen for it.

To the extent that there is any Muslim threat, it is one created by the US and Israel. Israel has no diplomacy toward Muslims and relies on violence and coercion. The US has interfered in the internal affairs of Muslim countries during the entire post World War II period. The US overthrew an elected government in Iran and installed the Shah. The US backed Saddam Hussein in his aggression against Iran. The US has kept in power rulers it could control and has pandered to the desires of Israeli governments. If America is hated, America created the hate by its arrogant and dismissive treatment of the Muslim Middle East.

There is no such thing as Islamofascism. This is a coined propaganda word used to inflame the ignorant. There is no factual basis for the hatred that neoconservative Islamophobes instill in Americans. God did not tell America to destroy the Muslims for the Israelis.

In America today blind ignorant hate against Muslims has been brought to a boiling point. The fear and loathing is so great that the American public and its elected representatives in Congress offer scant opposition to the Bush administration’s plan to make Iran the third Middle East victim of American aggression in the 21st century.

Most Americans, who Harris believes to be so reasonable, tolerant, and deliberative that they cannot defend themselves, could not care less that one million Iraqis have lost their lives during the American occupation and that an estimated four million Iraqis have been displaced. The total of dead and displaced comes to 20 percent of the Iraqi population. If this is not fanaticism on the part of the Bush administration, what is it? Certainly it is not reason, tolerance, and deliberation.

The Bush supporter will ask, “What about 9/11?” Even those who believe the fraudulent 9/11 Commission Report should understand that in the official account the attack was the work of individuals, none of whom were acting in behalf of Muslim governments and none of whom were Iraqi, Afghan, or Iranian. 9/11 provides no justification for attacking Muslim countries.

Paul Craig Roberts was Assistant Secretary of the Treasury in the Reagan administration. He was Associate Editor of the Wall Street Journal editorial page and Contributing Editor of National Review. He is coauthor of The Tyranny of Good Intentions. He can be reached at: PaulCraigRoberts@yahoo.com

38 responses to “The Politics of Blind Hatred”